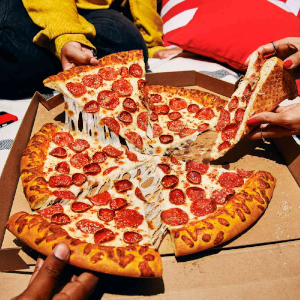 We’ve covered announcements of food-related Guinness Records in the past. They’re fun, and sometimes even socially significant. One ‘Records’ category that keeps getting updated is ‘Largest Pizza’. And it’s just been bumped up again! 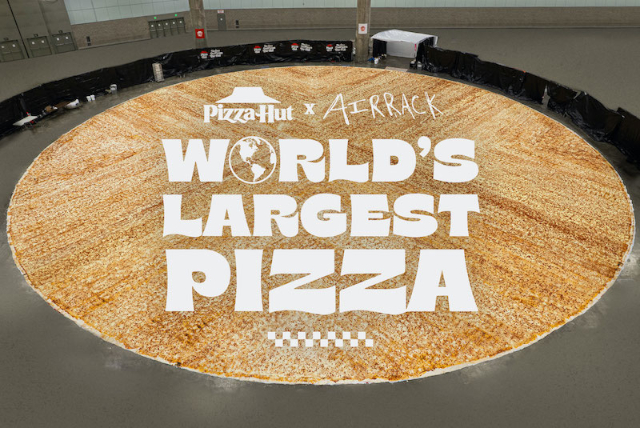 Might be a long time before the Guinness ‘World’s Largest Pizza’ record is rewritten again – after the latest record re-set this past weekend in Los Angeles.

The traditional round pie was confirmed by Guinness judges to measure almost 14,000 sq. ft. of crust, covered with, “approximately 4,948 pounds of sweet marinara sauce, over 8,800 pounds of cheese and roughly 630,496 regular and cupped pepperoni.”

A promo stunt with a point

The gigantic pie was prepared by a small army of pizzaiolos, under the direction of Pizza Hut pie architects and You Tube pizza guru @airrack. The finished monster was laid out on the floor of the LA Convention Center. There was no place else big enough to accommodate the thing.

On the ‘serious’ side, the stunt was as a promotion for the return of the Big New Yorker just in time for Super Bowl sharing.

On a practical level, the gargantuan pie – after all the specs were triple-checked and the photos taken – was disassembled for distribution to local LA charities and food banks.

First and foremost… They missed a huge promo opportunity by not making the giant Big New Yorker pie in the Big Apple. Somebody was asleep on the switch on that crucial decision…

I’m pretty sure, from the photos I’ve seen, they laid Pizzazilla out for its portrait on the floor of the convention centre. No details provided but were any precautions taken to ensure it stayed clean and wholesome to eat? I’m 99.44 percent certainthey must have, but…

Why no average-sized people in the photos to use for size comparison?

I won’t belabour this point: but I assume they made rectangular pies on a bunch of standard sheet pans then joined them together, and trimmed out a round master shape from the mosaic. I hope they didn’t just toss the trimmings. That would have totally disrespected the point of distributing the final pie to charities to avoid waste…

Wish they had assembled all the volunteers and pros involved in the project for a group photo. If they did, I didn’t see it.

Same goes for critical details of the mega-pie: diameter, number of standard slices it represented? How many community organizations benefited?

Where were the usual quotes from project organizers? And community beneficiaries?

And… Who should get to keep the Guinness commemorative plaque? Last seen in a photo of @airrack… Or shouldn’t Pizza Hut have accepted on behalf of everyone who made it possible?

Kind of disappointed they just defaulted to making a bunch of smaller pies and sewing them together in a mosaic. Other, lesser yet considerable record holders have been crafted, with some creativity and effort, all in one piece.

I may have been out of the business on a daily, professional basis for 15 years, give or take. But even my rusty old reporter’s nose is suggesting something’s rotten in the state of California about this story. Or I guess it just could be the Long COVID acting up again…

2023-01-23
Previous Post: When Does ‘Intensive Home Prep’ Become ‘Processing?
Next Post: Why Brown Rice Is So Darned Good For You…