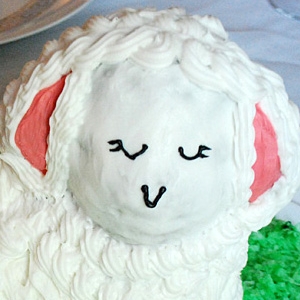 What To Serve For Easter Sunday Supper…

Okay. It’s time to tackle the touchy subject of what to feature in your Easter Sunday family feast. Will it be Ham, Lamb, Turkey? Or whatever? Your family’s tastes and traditions will, in the end, dictate your choice of protein. But, if history is a guide, you’d best make it Lamb, for good luck… 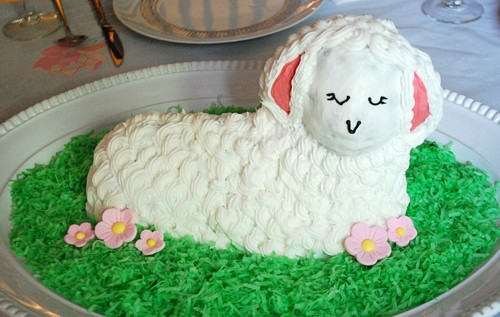 An Easter lamb Cake. Now-a-days, you can find Chocolate Lambs, sculpted-Butter
Lambs, lamb-shaped Pastries and all manner of Lamb-oriented stuff at Easter.

I checked a number of sources on the Web and I’ve discovered a lot of things I didn’t know before about the tradition of Lamb at Easter!

I’m not the only one who was wallowing in a sea of misconceptions about this ancient tradition. In fact, it’s so widespread that it’s become the stuff of satire. I recently had someone repeat back to me a line from an episode of an old BBC comedy series about the tabloid newspaper business: “Ah, yes… Compassion! The Mint Sauce on the Lamb of God!”

That sardonic statement (spoken by the arch villain of the piece, appropriately) is all the more satirical not only because it’s borderline sacrilegious, but because it’s so, so based on misinterpretation and misconception!

Let’s all pledge, here and now, to wallow no more in the turbid tides of ignorance!

The custom of Lamb at Easter is even more ancient and venerable than you might think, Most Christian believers and observers think the Lamb-at-Easter rule began around 2,000 years back when Christianity began. Not so.

Folks in the Mediterranean region have been roasting lamb on feast days of all sorts for millennia. They believe the ritual that brings good luck. the connection to Christianity, technically, goes all the back to the Book of Genesis, in the story where Abraham was asked by God to sacrifice his son, Isaac – in place of what was already ‘the sacrificial lamb’ – to prove his faithfulness to God. God relented. Abraham proved his faith and his son was spared.

Actually, it was the Hebrews who brought the Lamb Feast tradition to modern Christianity, as they blended and converted during the early years of the first millennium. Lamb was already the centrepiece of their Passover Seder dinner, which coincides with Christian Easter, along with Matsoh, Wine, Nuts and Bitter Herbs, among other symbolic foods. Christians took up the tradition of Lamb at Easter and, in fact came to refer to Jesus as The Lamb of God.

During the first millennium, Monks affirmed the place of the Lamb in Christian symbolism, enlarging on belief that the Devil could take the form of any animal except the lamb. It is still thought lucky to be visited by, or visit a lamb at Easter.

Early in the second millennium, a spit-roasted Lamb became the centrepiece of the Pope’s Easter Dinner.

And things just took off from there…

Now-a-days, you can find Chocolate Lambs, sculpted-Butter Lambs, lamb-shaped Pastries and all manner of Lamb-oriented stuff at Easter. Lamb for Easter is here to stay.

So.. If you weren’t going to have Lamb for Easter, you still have two more days to shop!