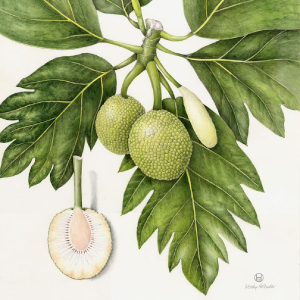 Sunday Musings: Breadfruit In The News – After 231 Years!

I was looking for something truly fascinating as the topic for this weeks Sunday Musings when I tripped over a report about a recent study on Breadfruit, a tropical plant that has all kinds of nutritional benefits and could become the answer to the growing problem of food security… 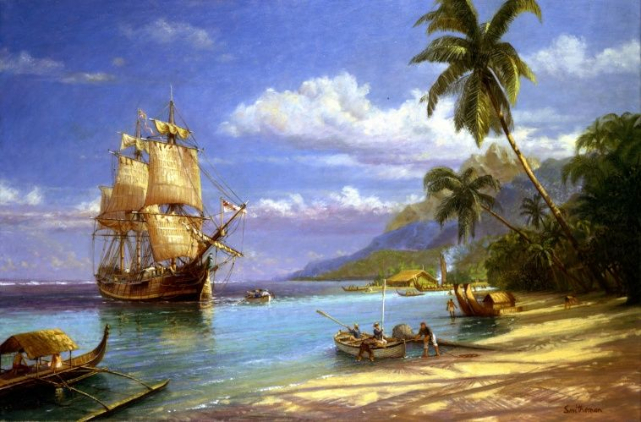 Who hasn’t seen at least one of the several movie versions of Mutiny On The Bounty? I’ve found evidence of at least 3 of them, all based on the 1879 novel by Jules Verne. While the Verne version of the story is well-known, it turns out that the 19th Century fictioneer was blatantly freewheeling with the truth – and in fact, got it all wrong with respect to who was the bad guy and who was really the good guy. Really. But more about that later.

The famous mutiny took place in the early hours of April 28, 1789, shortly after Bounty set sail on its return to Britain following a long visit to Tahiti on a special mission. Bounty’s captain, William Bligh, had been ordered by his masters at the British admiralty to gather specimens of the Breadfruit plant, which was ubiquitous to Polynesia and universally enjoyed as a staple food by the natives. The Admiralty, on behalf of the British government, was interested in transplanting Breadfruit to the Caribbean to provide a nutritious, hardy, fast-growing food source for the slaves who worked on the economically important Sugar Islands there.

The problem was, the Bounty’s crew got to like life in paradise during the ship’s several-month layover at Tahiti while the botanists did their work researching Breadfruit up, down and sideways. As all good things do, the stay at Tahiti came to an end and the ship set sail for the Caribbean loaded with plant specimens and a gang of disaffected men who had left behind new friends, lovers and, in some cases, children on the way. After a drunken fight with Bligh, a ship’s officer, Fletcher Christian and his followers set Bligh and 18 of the his followers adrift in a small boat and beat it for Tahiti, where they picked up their loved ones and set out to find a place where they could settle in peace without being found by the Royal Navy.

They found a tiny island named Pitcairn and that would have been that. Except that Bligh and his backers managed to reach civilization – Timor – after a grueling 47-day, 6,710 kilometer journey. The Navy caught up soon thereafter with the mutineers, some of whom swung for their deeds. By all contemporary accounts, Bligh was described as a more humane than average captain. He was promoted to Admiral before his retirement a few years later.

Now, back to our musings…

Okay. So what’s all this got to do with food today? New studies have revived the interest in Breadfruit as a plentiful source of nutritious food that could be processed into a Gluten-free flour for use in all manner off processed foods.

The most recent study, by researchers from the University of British Columbia, confirms the earlier claims about the benefits of Breadfruit and add some more.

“Breadfruit is a traditional staple crop from the Pacific islands with the potential to improve worldwide food security and mitigate diabetes,” says Dr. Susan Murch. “While people have survived on it for thousands of years there, was a lack of basic scientific knowledge of the health impacts of a breadfruit-based diet in both humans and animals.”

Doctoral student Ying Liu led the study examining the digestion and health impact of a Breadfruit-based diet. According to an abstract of the study report, the few studies done on the product have been to examine the glycemic index of breadfruit – with a low glycemic index it is comparable to many common staples such as wheat, cassava, yam and potatoes.

The use of breadfruit is nutritious and sustainable and could make inroads in food sustainability for many populations globally, she adds. For example, the average daily consumption of grain in the United States is 189 grams (6.67 ounces) per day. Liu suggests, if a person ate the same amount of cooked breadfruit, they can meet up to nearly 57 per cent of their daily Fibre requirement, more than 34 percent of their protein requirement and at the same time consume vitamin C, potassium, iron, calcium and phosphorus.

The researchers found no toxic side effects to a breadfruit diet.

Liu says that more research needs to be done, to flesh out the findings of their basic mouse-based studies: “Fundamental understanding of the health impact of breadfruit digestion and diets is necessary and imperative to the establishment of breadfruit as a staple or as a functional food in the future.”

Just one question: If Breadfruit was already known to be a healthy, nutritious food, why did it take more than 200 years for scientists to get around to exploring it as a food for the future, when population pressure and climate change will press us to find new protein sources?