Street Food Discoveries: Hints Of What The Future Holds

How does one follow up the last couple of Street Food posts in this space? The ones on The Best Street Food City in the world and The Best of the Best? Seemed logical to ask around about what the so-called experts think will be topping the grab-and-go charts next… 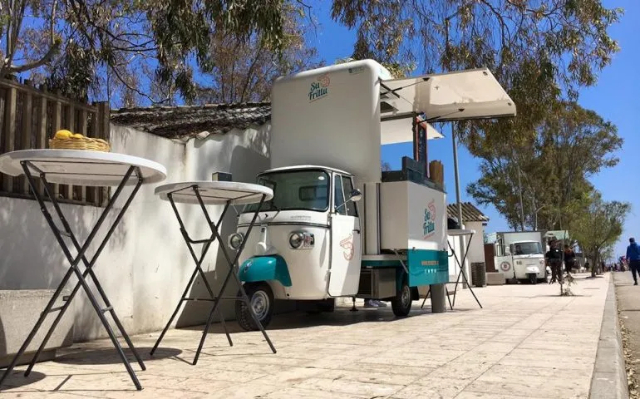 We’ve touched on this sprouting phenomenon before, but it bears a little more elucidation. Vehicles designed and built specifically for Street Food production and vending are beginning to take over the serious Street Food high-end.

Waste-minimizing food trucks: Are starting to appear, mainly at industry trade shows, at this point. But they’re a great idea, especially in undertakings like street food pep and sales that make extensive use of disposable containers and implements.

Space-saving food trucks: I was surfing around Googling ‘street food innovations’ earlier, when I came across an item about a truck designed to sell only one menu item (albeit, in several variations) and is built on the chassis of an Indian jitney (motor scooter-based taxi). Perfect for Asian and other urban environments where streets may be narrow and traffic heavy.

Specialized food trucks or stalls: We’ve seen that this idea is often embraced in locales where hundreds of separate street foods – in thousands of versions – are offered. It follows that grill-equipped, steamer-equipped, fryer-equipped or even vertical rotisserie-equipped vehicles would keep capital costs low (by eliminating expensive gear that might never be used by specific vendors) and concentrating on high-efficiency, fuel efficient appliances to keep costs down an emissions low.

Sales-only food trucks: Strategically located and kept stocked by roving delivery vehicles bringing centrally-prepped dishes from ghost kitchens. Those, in turn, could be dotted around town in multiple locations to ensure food is hot and fresh.

When you think about it, the idea of purpose-built street Food vehicles would be sort of a throw-back to the old Ice Cream trucks and Hot Dog stands of yesteryear. Just proves that really greats ideas don’t die; they just keep coming back in new, updated duds making the best possible use of the latest technological and business-model innovations…

Otherwise known as Myanmarian, these days. Interest in traditional Southeast Asian dishes continues strong. And Burmese cuisine, in particular, has been getting a lot of chatter in Street Food circles:

Other crossovers currently being dabbled with

The future is now

Many of the above notions are already on offer, or are in active development. All are, I think, valid ideas about where Street Food can and probably should go next. All that’s required is that we open our minds and listen to our palates when something new is suggested. The age-old principles still apply: traditional flavours and ingredients will always appeal when they are presented in ways we know (from long experience) work. The trick, as has always been the case, is to successfully adapt them for take-away, out-of-the-hand dining…