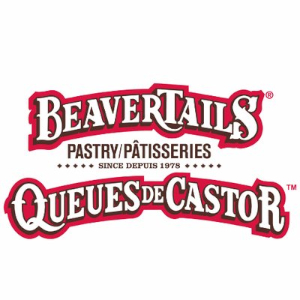 We’ve mentioned it in passing several times, but there’s a quintessentially Canadian street food treat that I’ve decided really deserves a solo spotlight. What’s better, it was made famous in my home town, Ottawa, and is now known and loved around the world. Kinda makes a person proud… 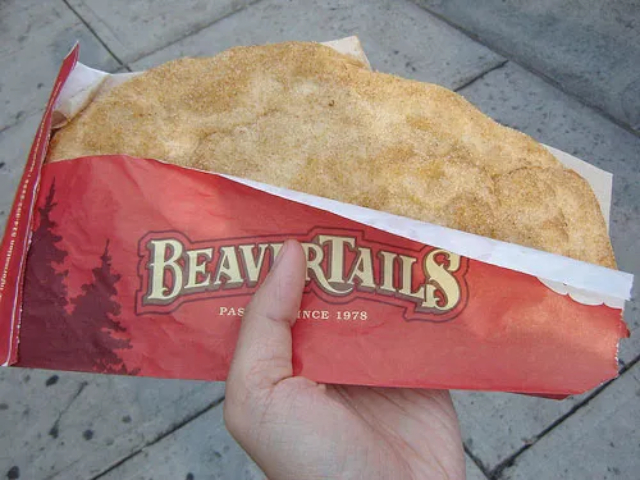 A real handful: The Classic BeaverTail, dusted with cinnamon sugar…

I speak of none other than the renowned BeaverTail – a flatbread for all seasons, all reasons.

If you’re a regular reader of the FFB, you’ll know the BeaverTail is a big, flat oval of deep-fried yeast-raised dough that may be topped sweet or savoury with almost anything you can imagine. It started out as a static presentation, always dusted with cinnamon sugar right out of the fryer. But fans demanded more. And they got it.

The name comes from its undeniable resemblance to a beaver’s tail. And, hey, how much more Canadian can you get?

The problem facing the BeaverTail, in its long and fraught quest to gain recognition as the unique, world-class dish that it is, has been that many street food aficionados – mainly Americans – insist that it’s nothing more than a ripoff of the well-known U.S. favourite, the Funnel Cake. That Trump-like claim couldn’t be more false. First of all, the Funnel Cake is made by swirling a stream of batter into a hot fryer, forming a spiral, pancake-like slab which usually turns out more round than oval. And only recently have Funnel Cake purveyors dared to experiment with toppings more complex and tantalizing than cinnamon sugar.

The claim by U.S. foodies that the BeaverTail was not invented in Canada is as flimsy and scurrilous as their claims that poutine, maple syrup and cheddar cheese were invented in Vermont.

As with most great foods, the BeaverTail started out as a Mon and Pop affair when, in 1978, Pam and Grant Hooker started selling their pride and joy at the Killaloe fall fair, a few hours west of Ottawa. A few years later, the Hookers brought their sweetie to Ottawa’s world-class Winterlude festival where they sold it from stalls along the World’s Longest Skating Rink. Thousands of festival-goers were introduced to the BeaverTail and, shortly thereafter, a BeaverTails stall was opened in Ottawa’s historic Byward Market. That location has become a shrine of sorts, for lovers of the pastry, and is considered the launching pad for dish, which now is sold in 140 places across Canada and overseas.

The little pastry that could is now available across Canada and the U.S., and even at some international shops.

Check out the Beavertails website to find the location nearest you. Or make a point of visiting the BeaverTails Byward Market location the next time you’re in Canada’s capital!

2022-06-27
Previous Post: Sunday Musings: ‘Exercise’ In A Pill? May Be Getting Closer
Next Post: Sattu: India’s Next Big Street Food ‘Thing’ Emerges