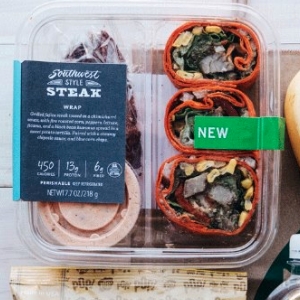 According to a post I saw this morning, Starbuck’s is at war with McDonald’s. Funny. I thought the two were looking to dominate two completely different niches. But Starbucks is testing a new lunchtime deal that looks suspiciously like McPick 2 and BK’s ‘Four for $4’ promotion… 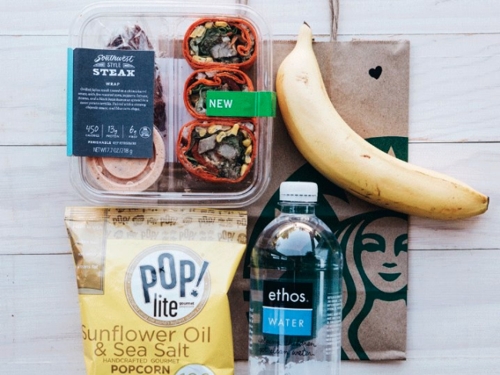 One possible configuration of the Starbuck’s $8 Power Lunch. A ‘Bistro Box’
is featured as the main component of this selection.

Here’s the big thing about the new Starbuck’s promotion: Coffee – Starbuck’s flagship menu item – is is nowhere to be seen! This signals that the high-end Coffee Shop chain is definitely going out to compete head to head with folks whose main business is food.

The Power Lunch package goes for $8 and comes with a bunch of options. You get a Salad, Sandwich or ‘Bistro Box’; a bag of Popcorn, Pretzels or Potato Chips; a Banana or a Granola Bar; and a bottle of water.

Starbuck’s says it would cost $3 to $4 more to buy all the components of the Power Lunch separately. That’s just one reason it’s been popular where offered – at selected Starbuck’s outlets.

So… The ball is back in the Fast-Food sector’s court.

This rivalry all started years ago, when McDonald’s decided to upgrade its Coffee to compete with upscale Coffee outfits like Starbuck’s. No way they were ever going to compete at that level, but better Coffee won them friends. Starbuck’s, on the other hand, was facing sales stagnation and needed to do something decisive to break out of the doldrums. It’s been back-and-forth between Starbuck’s and the Fast Food sector. not to mention within the Fast Food sector. And, in spite of their beast attempts, nobody has yet emerged as a clear front runner.

The Power Lunch deal is available until the end of the month.

As we often say, we’ll keep an eye on it and get back to you when something new breaks…