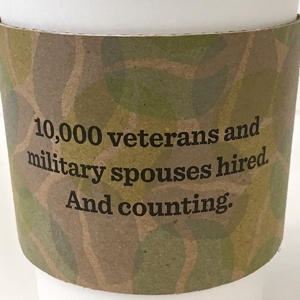 Starbucks announced, last year, that they would hire 10,000 refugees at their stores round the world. That touched off an Internet storm with that one, and the storm settled into a steady rain of calls for the mega upscale Coffee company to hire at least as many U.S. armed services vets. Starbucks responded… 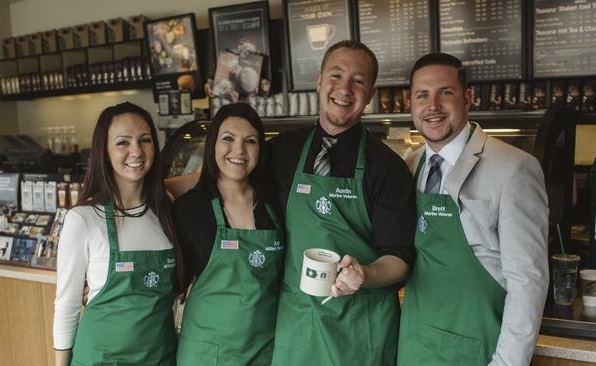 Starbucks rebounded from the criticism with a commitment to U.S. veterans and that commitment was embraced by the critics. But the initial outcry was so loud and so harsh that Starbucks has been making a very public effort to show that it is coming through on its promise.

The latest publicity spate from Starbucks focuses on a milestone – it says it has hired its ten thousandth veteran or military spouse on the program. And it’s promised to hire 15,000 more by 2025. On top of that, Starbucks has started honouring vets it hires with special uniforms – Starbucks aprons enhanced with American Flags, the name of the vet and the service branch they served in. And the company is most recently making hay about their Service Family Stores, which are owned and staffed entirely by vets.

There’s a quote from Shakespeare’s Hamlet that we’ve all heard at one time or another: “The lady doth protest too much, methinks.”

It has entered the English language as a comment indicating someone is making too much of a fuss about something, with the implication that the speaker is being insincere.

Doth Starbucks plug its campaign for veterans too much? I guess the company wants to make sure everybody who was up in arms about the campaign to hire immigrants now knows about it’s campaign to support vets. In a time when American service veterans are facing social and economic challenges the likes of which have not been seen since the Vietnam era, it’s good to know that someone is standing up for them and stepping forward to help.

But I think enough is enough. We get you, Starbucks. Good job. Now let’s move on. You don’t want that flag you’ve been waving so energetically to get frayed!