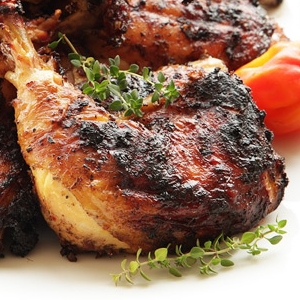 What Is Jamaican ‘Jerk’ Seasoning?

After I posted yesterday’s item about Usain Bolt’s new chain of Jamaican restaurants, my mother asked a question that I’ve heard many times but never taken the time to answer – until now. “What the heck is ‘Jerk’ anyway?” she wanted to know. Well, now is as good a time as any to tackle the mystery…

Classic Jamaican BBQ Jerk Chicken. If you don’t like it flaming hot, hold the Scotch Bonnets!

First of all… We, as educated cooks, know that ‘seasoning’ applies officially only to Salt and Pepper. So. I’m going to refer to ‘Jerk’ as a Spice Blend, hereafter.

Wikipedia tells us that the term ‘Jerk’ comes from a Spanish word, charque. This word comes, in turn, from older term ‘quechua’ which simply means ‘salted, dried meat. Originally, it was used to refer to preserved meat sold to travelers in South and Central America. Eventually, it entered the English language as ‘Jerky’.

Jamaica stands out in the annals of Jerkdom

But the Jamaican/Caribbean heritage of Jerk is specific to that region. And that heritage starts with Allspice – perhaps the most beloved flavour of the Islands. To that base, any number of other spices are commonly added, according to the taste of the cook who’s blending them. Those flavours may include… Cloves, Cinnamon, Scallions, Nutmeg, Thyme, Garlic, Brown Sugar, Ginger, and Salt. And, of course, Scotch Bonnet Peppers. You can use any or all of them, but you must start with Allspice and Scotch Bonnets for your concoction to be genuine Jamaican Jerk!

If you want convenience, Jerk Spice blends are available in Caribbean specialty stores and some supermarkets. They are all pretty hot, in keeping with Jamaican tradition. You can get either dry mixes or pastes, which are convenient for rubbing on prior to cooking.

All aboard the Masala Train!

All over the world, cultures and countries have their own signature Spice Blends. Jerk is the preeminent Spice blend of the Caribbean, in the same way as ‘Curry’ is the national spicy flavour of India. And, like Curry, there are as many variations of Jerk as there are cooks who make it. In North Africa, the tradition is Ras el Hanout. In China, they have many regional blends, most prominently, Szechwan and Hunan. Even the relatively young U.S. has its own signature flavours, most notably Southwest Tex-Mex and New Orleans Creole and Cajun. The list goes on and on.

All these blends are Masalas – the Hindi/Urdu word for ‘Spice’ – and all can be enjoyed on a heat scale from Mild to Atomic. So, don’t let the spicy reputation of Jerk scare you away from trying it. Just hold the Scotch Bonnets!