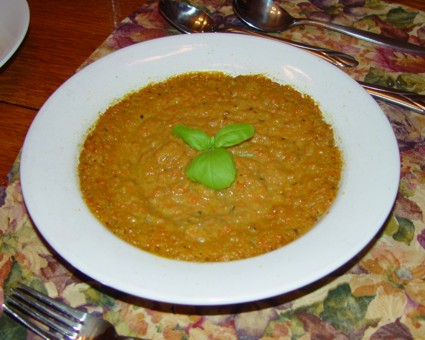 Soup is in season!

When I woke up this morning, it was -4C outside my bedroom window. Soup season has definitely arrived! And fall squash and root veggies are front and centre in the pantry.

Right under your nose

Looking in the fridge for something I could turn into a quick, hearty soup, I found some leftover roasted Onions and Carrots which I had put in with the Sunday roast and several slices of leftover roasted Pepper Squash from the night before.

On a whim, I threw the carrots and onions into the food processor along with the pulp scraped out from the squash skins and puréed the whole lot together. I used a third of a cup of olive oil to help the mixture liquify and to aid in the next step of preparation.

I preheated a large sauce pan to medium and placed the purée right into the bottom without adding further oil or butter. Since the carrots, onions and squash were all previously cooked fully, I simply heated the mixture to a simmer, stirring frequently to prevent burning, and added half a litre (about 2 cups) of chicken stock.

I brought the whole concoction to a slow boil for a few minutes, continuing to stir until the liquid was thoroughly blended with the veggie purée. Then, I turned the heat down again, to a nice gentle simmer, and added salt and white pepper to taste, a level half teaspoon of ground nutmeg (a best flavour buddy of squash and root veggies!), and the juice of half a lemon.

I let the soup continue simmering for another half hour, then added half a cup of heavy cream to give it a velvety, creamy finish. (Thin with additional stock if desired.) The only thing left to do then was to taste for salt and adjust the seasoning.

…And that turned out to be supper, with a few slices of French Baguette bread (or any other bread you like), topped with with minced garlic, butter and fresh rosemary, and toasted on a baking sheet in the oven under the broiler at 400F for a few minutes, until golden brown.

Variations on the theme…

You can make a beautiful, rustic veggie soup from just about any roasted squash or root vegetable using the technique described above, with the simple addition of some sautéed onion and whatever herbs or spices you want to try with it.

For a vegetarian soup, you can substitute Soy Milk for the Cream and swap out the butter, making up the difference with more Vegetable Oil.

Or, if you don’t necessarily want a vegetarian soup, you can start with a half cup of diced Bacon or Pork Belly in the pot to add even more flavour. The fat that renders out of the meat will replace some of the oil and butter called for in the basic recipe.

If you want to make it a complete meal, add cubes of fully cooked Ham or crumbled crispy Bacon to taste. Shredded leftover BBQ or Rotisserie Chicken also makes a great addition to these soups.

Steam a whole head of Cauliflower florets (sans leaves and core) and purée it with two cups of chicken or beef stock in a food processor or a blender, or use a stick blender right in the pot. Add herbs and spices of your choice. (Nutmeg keeps coming to mind!) Add a half cup of cream and a cup of grated Cheddar cheese near the end of simmering, stirring until the cream is thoroughly incorporated in the vegetable mixture and the cheese has melted completely into the soup.

Have fun with soup!

…And make lots of it. If not, you’ll be wishing you had some leftover for lunch the next day!