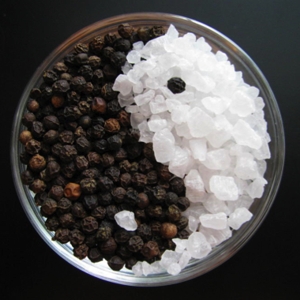 Seasonings and Spices: There’s a Difference

I mentioned the difference between seasonings and spices in my recent post about the Mystery and Magic of White Pepper. and got a pile of questions on the topic. I’ll try to answer them in this post-post follow-up. But I guarantee my answers will generate even more questions on this arcane subject… 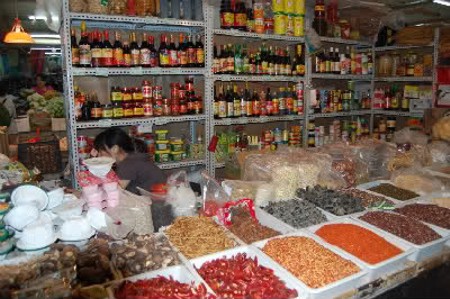 A Chinese Spice Market stall. They really know – and love – their spices
and seasonings!

As I said in my post on White Pepper, Seasonings are not the same as Spices, though both enhance the natural flavours of foods.

The most common seasonings, by far, in Western cookery are Salt and Pepper. Both employ simple tricks to perk up your taste buds so you taste more of the natural flavour of foods. We usually think of these ingredients as must-haves on Meat. But they also do wonders for Veggies. We all cook potatoes in Salted water, right? If you don’t, you’re missing out on a lot of rich Potato flavour!

Salt of the Earth… is just that!

Salt is a simple mineral made up of two fundamental chemical elements; Sodium and Chlorine. Its one of the elements what we need, in just the right amounts, to survive on this old Earth of ours. In ancient times, it was prized above most other substances because everyone knew it was essential. It was dug out of Salt flats where it had been left behind by evaporation of Salt water and carried as trade goods for thousands of miles. You could even use it as currency in some places. Some labourers were even paid in it, rather than in money or other valuables. Hence the old saying, that someone is ‘worth their Salt’. Add too much Salt, though, and you quickly note its own slightly bitter, metallic taste. We don’t really consider the taste of Salt a bonus except on fried foods and fatty snacks.

Where does MSG come in?

Which leads us to that Asian favourite, Monosodium Glutamate. Note that it’s a close relative of Sodium Chloride – ordinary Table Salt. Actually, it contains Salt and Glutamic Acid. It’s a non-essential Amino Acid, one of the most abundant found in nature, and it’s particularly abundant in Tomatoes, Parmesan cheese, Potatoes and Mushrooms as well as other fruits and vegetables.

Peppercorns do the same thing, but differently…

Peppercorns contain an alkaloid called Pepperine which tweaks your heat and acidity-sensing taste buds, helping you taste more of those qualities in your favourite foods. Add too much, though, and you quickly become aware of its overarching heat. there’s not much actual flavour there; just the raw sensation of heat.

Other ‘Peppers’ have other chemicals and other effects…

Aside from Green Peppercorns, which are just another (unripe) embodiment of the basic Black Peppercorn, all other Peppers are from different families altogether and can act both as Seasonings (in certain cultures) and Spices (flavourings).

All Chili Peppers, including Jalapeños, Bell Peppers, Scotch Bonnets, Banana Peppers and the rest of them, belong to the Capsicum Family and are found around the world. They rely on varying levels of the compound Capsaicin to produce a sensation of heat on the palate. A little is quite pleasurable, especially in traditional dishes that have been created to feature these colourful Veggies. Too much just floods the palate with heat obliterating all other flavours.

Szechwan Pepper, by the way…

…Is another type of Pepper, again! It’s the husk, or pericarp, of the dried berry of a plant sometimes called Chinese Coriander. It’s typically hot, especially if the whole berry is ground into a powder, and is featurered in such Asian classics as Chinese Five-Spice and the whole family of hot Szchewan-style dishes. Of course, Szchewan cookery also relies on dried or fresh Chili Peppers for heat and flavour! The flavour combinations and complements can be extremely complicated in Asian cuisine. In fact, it’s considered a study all of its own.

There won’t be a test next Friday, kids. But do retain as much of the foregoing as possible as you sail on through the wonderful world of food from all corners of the world!