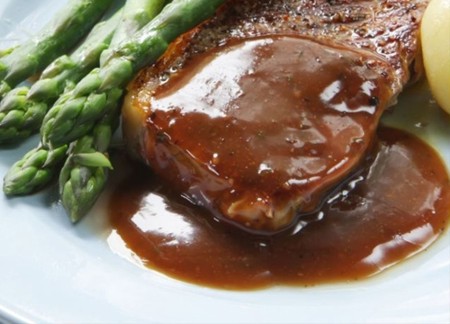 This time out, we’ll leverage everything we’ve learned so far about stocks and thickeners in an exploration of rich, dark, versatile Espagñole Sauce.

A pattern is emerging…

We’ve seen how thickeners play a part in all the classic sauces discussed so far, whether they rely on Milk or Stock as their liquid base.

Carrying on with stock based sauces, we’ll now look at the “dark side” of meat stocks, or those made with roasted bones with (often) tomato product added for extra rich colour and flavour.

Dark stocks are usually made from Veal and/or Beef bones, roasted in the oven with a light drizzle of vegetable oil and a daubing of Tomato Paste or crushed Tomatoes. Simmered for eight hours or more with the usual mirepoix blend of aromatic vegetables, the result is a hearty, dark Brown Stock.

It is Brown Stock that is usually reduced to make a Glaçe, or Meat Glaze. A Demi-Glaçe is usually prepared by mixing Brown (Espagñole) Sauce and Brown Stock half and half and reducing the volume by half via simmering.

Thicken Brown Stock with Roux to create your basic Espagñole Sauce. You may want to add a dab more Tomato product, as well, for that classic flavour profile that the French so love in this cornerstone sauce, brought to the French royal court in the 17th century through intermarriage with Spanish Royalty.

All you need to add is Salt and Pepper to taste. For this sauce, be sure to cook the Roux until it develops a rich brown colour and a nutty flavour. Just be careful not to burn it! Always cook Roux on Medium low and be patient.

But that’s just the beginning!

Basic Brown Stock is your gateway to almost all brown sauces in the classic French culinary repertoire.

And it’s just the ticket to make a sauce for strongly flavoured dishes or dark meats which don’t produce sufficient juices during cooking to turn into their own Jus or Jus au Lié. (Note: This is NOT cheating!)

Bordelaise Sauce… is made by adding Red Wine, Shallots and Thyme.

Port Wine or Madeira Sauce… is made with Demi-Glaçe and a splash of the appropriate fortified wine of your choice.

Mushroom Sauce… is as simple as adding sautéed mushrooms and shallots, a dash of Sherry  and a squeeze of lemon to Demi-Glaçe.

Poivrade (Peppercorn) Sauce…in its simplest form, is made by adding Red Wine and Crushed Peppercorns to Demi-Glaçe.

There are literally dozens of Espagñole Daughters and variations. Always keep lots of Brown Stock on hand!