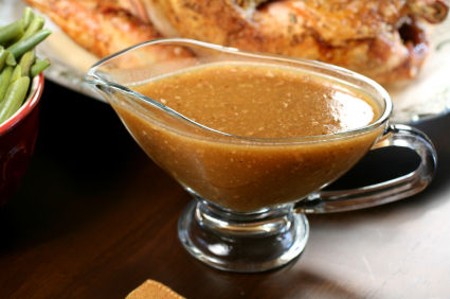 Sauces Part I – The Basics

Whether it’s a soup, a salad dressing, a fancy sauce for a special dish, or the gravy for the Sunday roast, Sauces constitute a central component of your cooking repertoire. The right sauce can make the meal!

In the traditional, formal French “kitchen brigade” system, there is always a lead cook who specializes in one thing and one thing only: making the sauces. While some professionals make creating the perfect sauce a lifetime pursuit, you can explore the wonderful world of sauces in your own kitchen with ingredients and tools you probably already have on hand.

Through thin and thick

Thickeners are a key part of all sauce recipes. Actually, I prefer to call them sauce “techniques” or methods, since all sauces within a certain family are made the same way.

While some classic and contemporary dishes are served “au jus” – that is with the natural unthickened and unflavoured pan juices from the meat in question – that’s a minority position in the greater culinary community.

Add a little flour and you have pan gravy or Jus au Lié (Jus with a thickener). You can use other thickeners if you like to produce different sauce textures and appearances. But we’re getting ahead of ourselves!

The simplest sauces are meat juices with a little seasoning and sometimes some additional flavouring.

A classic Alfredo Sauce for Pasta, Fish or Poultry is as easy as softening Butter and Garlic in a medium-low sautée pan, and stirring in some Cream and Parmesan Cheese. A little chopped Parsley is traditional and adds some welcome colour to an otherwise beige-on-beige dish. Here, the Cream and the Cheese produce the sauce’s velvety thick consistency. I also like to throw in some chopped Sun Dried Tomato!

The majority of mainstream sauces are members of the classic French Sauce Families. They all feature a base liquid, a thickener of some kind, and a characteristic flavour base.

Any study of sauces must begin with the Master, or Mother Sauces.

Béchamel, the basic milk-based sauce, is sometimes referred to as “White Sauce”.

Veloutés are made by concentrating and thickening light coloured meat (poultry, veal, fish) or vegetable juices.

Espagñole is the general name for brown sauces made by concentrating and thickening dark meat juices (typically from red meats, often with Tomato products added for extra body).

Hollandaise is the master egg yolk based sauce. Béarnaise, Mousseline and other golden creamy sauces are created by enhancing or modifying this classic. And don’t forget their half-sister, Mayonnaise!

Stock is the culinary term for the flavour-infused liquid made by simmering meat or poultry and its bones, fish bones and/or seafood shells, or aromatic vegetables in water for appropriate periods of time. We’ll discuss how to make great stock in a future installment of this Sauces series.

Stocks are the essence of many sauces, principally those in the Velouté and Espagnole families. They’re also invaluable when making soups!

Aromatic vegetables and herbs are used to flavour basic stocks. and give them body.

We don’t add salt or pepper (the classic seasonings) when making stock, because we don’t want to anticipate the seasoning needs of future dishes in which the stocks will be used. But we do use aromatic vegetables to give body and complexity. The classic French Mirepoix is 50 per cent Onions, 25 per cent Carrots and 25 per cent Celery.

In Italy, they use Soffrito, made with whatever aromatic vegetables they have on hand and always sautée them in Olive Oil, rather than Butter, Lard or other Vegetable Oils.There are as many different Soffrito recipes as there are cooks who make it!

In Spain, the Caribbean and Central America, they have version is called Sofrito (with one “f”), based on Garlic, Onion and Tomatoes.

In New Orleans, where Creole is king, they prefer what they call the Holy Trinity: Sweet Green Pepper, Onion and Celery.

The French love to add a Bouquet Garni, or herb bouquet to their stocks. These traditionally include short sticks of Celery tied together with string into a bundle with one or two Bay Leaves, some Parsley stems, a couple of sprigs of fresh Thyme and some fresh Rosemary. Other flavours are optional. Dried herbs may be used but, as these usually come ground or flaked, they are usually contained in a sachet, a gauze bag tied up with string.

In Sauces Part II, we’ll learn how top make great stock for all your sauces and soups!