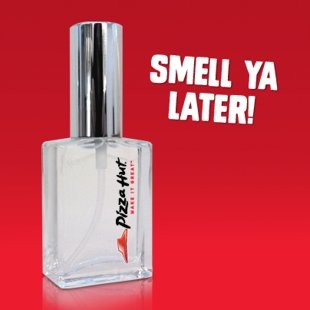 By: admin
In: Food News, Pizza Wisdom and Lore

It all started this past August when Pizza Hut Canada started talking about a then-hypothetical “Pizza Perfume” on its Facebook page. Thousands of Pizza Hut Facebook Friends “Liked” the idea and it went viral … in a stealthy sort of way. Pizza Hut never suspected the grassroots movement that was quietly germinating online. 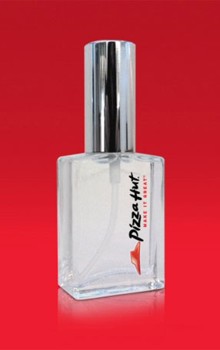 As the Globe and Mail reports, in September, Pizza Hut asked Friends who were serious about the scent to send a direct request to the company’s Facebook page. They expected a couple of hundred responses total, but got more than 1,000 – in the first hour!

So, they hired an Aromacologist. (That’s apparently the official name for someone who blends and balances essences to create new perfumes and product aromas.) And after what Pizza Hut Canada’s Marketing Director, Beverly D’Cruz, calls “a couple of rounds”, the powers that be arrived at something geared to remind you of that first whiff of a piping hot Pizza Hut pie when you first lift the lid – a true out-of-the-box experience.

An official Pizza Hut statement says it smells like, “fresh dough with a bit of spice.”

At any rate, 100 lucky (?) Pizza Hut Facebook Friends will receive a bottle of the scent in time for Christmas, according to the brand’s Director of Digital Strategy, Eric Vieira – who also gets the last word:

“I hope some poor guy doesn’t give it to his girlfriend.”