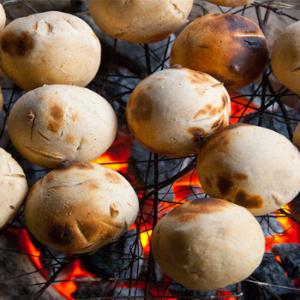 Word is spreading fast. On the internet they would say it’s gone viral. In the product world they call it a ‘breakout’. It’s what Indian food experts are calling their new darling. But the truth is, it’s something as old as Indian cuisine itself dressed up in bright new colours and flavours… 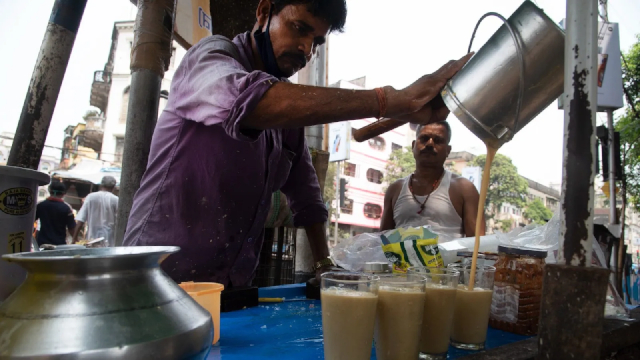 Street vendor Kishan Yadav pours a quartet of Sattu Sherbets
– or shakes – on a typical busy, sweltering day in June.

If you’ve dabbled in Indian cooking at all, you’ll have come across gram, or chickpea flour – not ‘graham’, but ‘gram’ – and used it in a few recipes. Sattu Powder is very finely milled chickpea flour usually made from the dry-roasted beans of a variety of the plant called the Bengal gram, also known as besan. It’s described as a versatile starch with a mild, nutty flavour. And as any chickpea/garbanzo enthusiast will attest, it is very versatile. But now, a Sattu beverage little known in higher spciety is rapidly gaining prominence with foodies and plain folks alike.

The choice of the working classes

Generally sold from street stalls, it’s a favourite thirst quencher for taxi drivers, cart pullers and the like. One reason, beyond the flavour and almost chewable texture, may be its attractive price: just 10 rupees / (US)$0.13 per jumbo glass. But the beverage, which has long remained an open secret on the fringes of the Indian food scene, is now gaining traction in the mainstream.

How long has the Sattu shake avoided the gaze of foodies? Food historian Colleen Taylor Sen, in her book Feasts and Fasts: A History of Food in India, says the Sattu tradition goes all the back to the Vedic period (1500-500 BCE). At that time they ground barley seeds in to a powder they called saktu, a precursor of Sattu. While meat and milk – expensive in that day – were most often reserved for the well-off, Sattu was a cheap, nutritious staple for ordinary folk.

But there’s more: Sattu is gluten free, vegan, and can be used in a wide variety of dishes. One is the ancient, beloved street nibble Litti Chokha, small, bite-sized dough balls stuffed with Sattu and spices, grilled over a charcoal fire (see photo, top of page).

Recipe? We don’t need no…

Sattu Sherbet (the aforementioned popular shake) is more a traditional method than an actual recipe. The variations you’ll encounter on a Sattu food safari across the subcontinent will overload your mental processors. BBC food correspondent Sugato Mukherjee shares this artful and atmospheric observation of one busy Sattu stand proprietor at work:

“Kishan Yadav poured sattu powder into a steel pot half-filled with water and vigorously stirred the contents with a wooden ladle. He sprinkled the thickening mixture with salt, cumin powder, black pepper and a dash of lemon juice and whisked the beverage to ensure there were no lumps. Then he filled a tumbler with the pale-yellow shake, garnished it with a few onion slices and bright-green coriander leaves and handed it to me…”

Always a down side

There’s always a down side to anything as wonderful and cheap and abundant as Sattu. Can you guess? As Sattu becomes a mainstream and foodie hit, sales of the powder have risden. And prices are beginning to follow suit. But the folks who have quietly preserved the Sattu tradition for hundreds of years – the street vendors – are cautiously optimistic.

“As long as I can provide my customers their glass of sherbet at Rs. 10, I am happy. I only hope all this hullabaloo does not shoot up the prices,” Yadav told the BBC. I’m rooting for him!