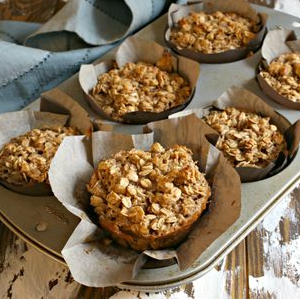 I’ve been sitting on this one for a while, but it’s burning a hole in my pocket. I’ve often remarked how fundamentally unhealthy traditional ‘energy’ bars are. Lots of healthy grains, yes. But glued together with sugar and corn syrup. Loads of carbs and calories for the athletic minority. But unbalanced overload for the rest of us… 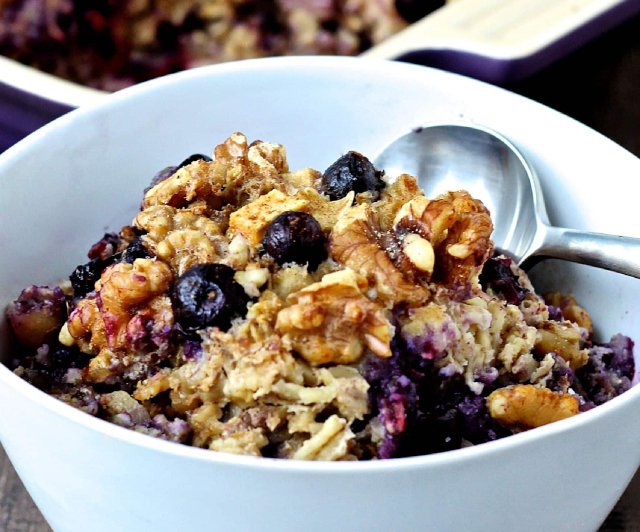 So, when I first encountered Baked Oatmeal, I was skeptical. Where’s the catch? I wondered. Even before I performed due diligence researching the issue and checked the ingredients list, I thought, “This is just another food fad; a homemade version of granola bars, with pretensions of healthfulness.”

But I had a nagging suspicion I might be wrong. So I gave it a chance to prove itself worthy of promotion. And this post can be considered ‘study report’ on my research.

Baked Oatmeal is merely oatmeal that’s baked in the oven rather than stirred on the stove top. But because of the way it’s cooked, it comes out very different from the creamy cereal you’re used to. It looks like a first cousin to a crumble dessert, but the superficial resemblence is where the similarities end.

2. Pour the contents into a well-greased casserole and bake in an oven at 350 F for 40 to 45 min. You can make individual baked oatmeal cups using a muffin pan. Grease well and line with muffin papers (See photo, top of page). Two of these constitute a regular serving.

3. When the dish is taken out of the oven, immediately garnish the Apple Crumble Baked Oats with a few apple slices and a dollop of peanut butter.

The finished dish is described by Quaker in its landmark original post as, ‘Classic crumble flavour + smooth cake texture’.

Since then, hundreds of different baked oatmeal variations have emerged online, and Quaker has evolved its original recipe to keep pace. Just Google ‘Baked Oatmeal Recipe – Quaker Oats’ for an entrée to a whole new world of possibilities.

There never really were any hard and fast rules about Baked Oatmeal. But most current faves include a teaspoon of Vanilla. Some add baking soda or eggs. One I saw even replaces some of the milk with a puréed banana. And virtually all feature dried or fresh fruits, nuts and/or seeds of some kind. There are also recipes adjusted to use instant oatmeal.

Add it all up, and Baked Oatmeal comes out way healthier than granola, energy bars or other so-called healthy oat-based concoctions. And since you make your own, you control exactly what goes into it.

Once you’ve tried baked oatmeal, you may never go back to the old fashioned kind!