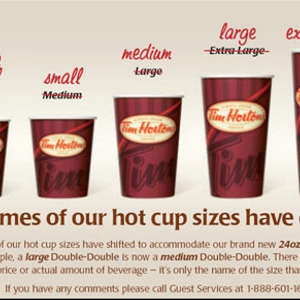 We’ve touched on this topic before, but new evidence has come to light recently about how the art and science of menu design connive to get you to want more, eat more and pay more when you go out to dine. Warning: Some readers may be shocked by what’s to follow, especially when they realize they, too, have been sucked in… 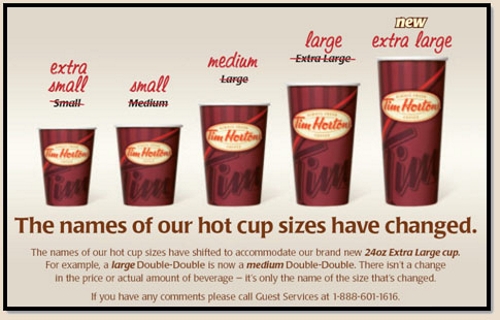 Seems all the fast food joints are changing their cup sizes. the idea is to get you
to buy more, whether you really want it or not. We recommend you
buy according to cup capacity, not cup name!

We’ve all seen many, many restaurant menus, from printed place mats in diners to leather-bound tomes in fine dining establishments. They all have their quirks and distinguishing design characteristics. But, apparently, one thing they all have in common is, they’re coldly calculated to get you to spend more money.

We’ve already seen, in this space, how expensive restaurants leave off the dollar signs, decimal points and trailing cents in their menus to de-focus your concerns about price.

Then, there’s the point-of-sale hook: Restaurants generally put stuff right at, or on the way to, the cash register to tempt you to make an impulse purchase before you leave.

A recent post on Yahoo! Finance reveals some new tactics foodservice retailers are using, and developing, to take menu hocus-pocus into the 21st century.

First, fast food establishments have been fiddling with their beverage portions and prices, lately. The idea, we’re told, has been to get you to pay more for what you usually buy. Sort of. According to the Yahoo! post, they’re changing their range of sizes on things like coffee and shakes. A large is now a medium and a medium is a small and… There wasn’t a small before! And there is a new ‘large’ at the top of the list, which is, granted, larger than the old large, but also priced higher. Even if you didn’t want more, they’re counting on you ordering the ‘large’ out of habit. And paying more.

Here’s the hook for the restaurant: The profit on beverages is huge, and increasing the size of a ‘large’ is a minimal cost compared to the extra profit they make when you get sucked into buying it! Like I’ve always recommended when chopping for groceries, boil it down to the unit cost when comparing. And always order on that basis. If you want a 16 oz drink, order that one. Even if it is now a medium and no longer a large!

Beware the coming of electronic ordering boards at restaurants (McDonalds is test-driving them in California as we speak), and, especially, computer- and phone-based ordering systems. The latter will gather information on your preferences every time you order, allowing the restaurant’s computers to present you with options you’re more likely to purchase at the top of the list. the idea, of course, is to get you to order more. And that’s just the beginning…