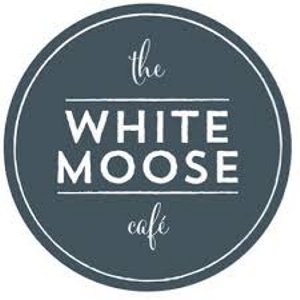 You’ll remember my recent post in favour of Gluten-bearing foods. I said Gluten does most of us more good than harm. We’ve evolved through a thousand generations to eat gluten-blessed foods and we shouldn’t avoid them just for the sake of following a fad. Now a restaurant energetically agrees! 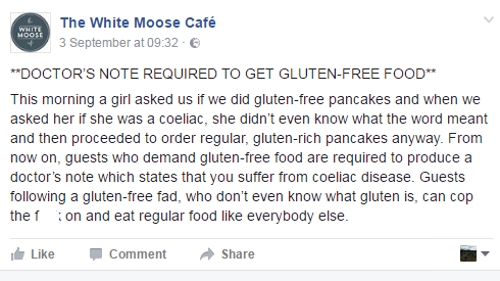 In my recent post, I argued that most recent medical evidence supports my stand, that Gluten has more positive effects for most of us than avoiding it will accrue. Indeed, there are health effects Gluten supports that we’ll miss if we eliminate it from our diets.

Celiac sufferers? No problem. And you’re lucky, in a way, that the anti-Gluten craze has alit upon our culture. It’s produced a huge new selection of foods and products that you can use to make your culinary life easier and more interesting.

On the other hand, some non-Celiac consumers are making life miserable for restaurateurs and food retailers who haven’t gone with their flow. I’ve heard of anti-Gluten customers verbally abusing ‘natural food’ sellers for carrying gluten-blessed products. Now, a restaurant in Ireland is fighting back against customer abuse over Gluten.

The White Moose Café in Dublin, Ireland, recently instituted a tough new policy on Gluten-free requests after one particularly prickly customer pushed their staff over the edge. the restaurant’s Facebook post tells it all in one sentence: “She didn’t even know what the word [gluten] meant and then proceeded to order regular, gluten-rich pancakes anyway.”

The incident actually prompted the owner of the establishment, Paul Senson, to create a new rule of the house: “From now on, guests who demand gluten-free food are required to produce a doctor’s note which states that you suffer from Celiac disease. Guests following a gluten-free fad, who don’t even know what gluten is, can, “…cop the f**k on and eat regular food like everybody else.”

Not his first rodeo

This isn’t the first time the White Moose has taken on food fad extremists. In fact, he carried on a three-month war of words with militant vegans over their perceived lack of Vegan menu items  at the Moose. First, he just told them off.: 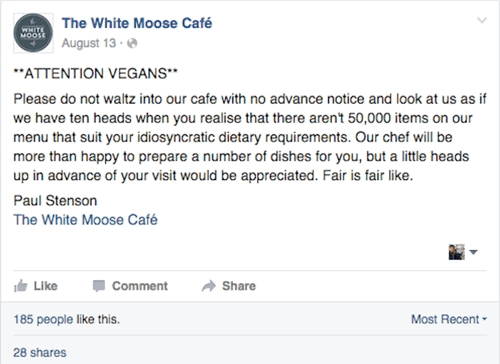 The Vegan community struck back by orchestrating an avalanche of negative online reviews. Stenson opined as most of those reviews came from angry people who had never been in his establishment. He was probably right. The abuse continued. So Stenson amped up his defense, offering a bottle of Champagne and a free weekend at the hotel in which the restaurant is located for the first person to write a five-star review of the Moose. That was by way of reporting that the place had received more free publicity in the past few days – thanks to the online assault – than it could ever afford to pay for.

The Vegans took the bait and came back even more forcefully, flooding the net with bad reviews and verbal abuse. Stenson replied by banning all Vegans from the Moose – obviously a satirical move to place Vegan tactics in the ‘battle’ in the realm of the ridiculous. The Vegans hammered on. So, Stenson took his satire a step further and threatened to shoot Vegans who attempted to enter the Moose on sight. Well! Didn’t the poop fly online, then! Finally, Stenson posted what, at first glance, looked like an abject apology to the Vegans. It was contrite, self deprecating and meek to a fault. Until the P.S.: “F**k you.” The online war continued, into the stratospheric heights of satire ,at least on Stenson’s part. The Vegans just got madder and madder. As of the end of October last year, when Stenson posted a thank-you to the ‘hundreds and thousand of Vegans all across the world who’ve been working so hard to promote our café.” However: “P.S: You’re still barred.”

So there’s a taste of what the non-Celiac anti-Gluten people have coming if they dare to escalate their attacks on The Moose!

2016-09-07
Previous Post: Do You Trust Your Food And Your Farmers?
Next Post: Maple Syrup Producers Fighting Monopoly