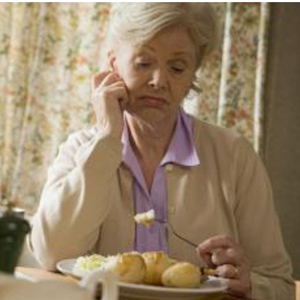 Poor Appetite A Danger for The Elderly

The American Geriatrics Society estimates that between 11 percent and 15 percent of older adults who live independently have poor appetites. And that can lead to a host of other, more serious problems related to diet. What can we, as caregivers, do to help older folks enjoy their food more?

The American Geriatrics Society (AGS) says, strategies to improve our appetites as we age include reducing portion size, increasing meal frequency, and using flavor enhancers. Until recently, however, these options have not proven to improve food intake or quality of life for older people. That’s one reason a team of researchers designed a study to examine the differences in food intake among older adults with varied appetite levels, which was recently published in the Journal of the American Geriatrics Society.

More than 2,000 people aged 70 to 79 were asked to fill out a survey about their eating habits. More than one in five said their appetites were ‘poor’.

Among the specific results of the study, the survey found that those who reported poor appetites also suffered from a lack of protein and dietary fibre. They also ate fewer solid foods, protein-rich foods, whole Grains, Fruits, and Vegetables. But they consumed more Dairy products, Fats and Sweets (including sweetened beverages) than their peers who reported having regular appetites.

Popular strategies for enhancing appetite focus on enhancing flavour. You can use more Salt to rev up the taste buds, but that can lead to other serious problems. Other flavour enhancers are available and should be considered. Some older folks respond well to being served smaller portion sizes, possibly because they see smaller portions as easier to deal with. The total amount of food older folks consume on a given day can be increased by adding snacks and additional meals to their schedule. It’s also a good idea, I’ve found (as a caregiver to my 90-year-old mother), to ask older folks what they like to eat and try to work those foods into their regular meals and snacks.

In some cases, dietary supplement beverages such as Boost or Ensure can help ensure that older folks with picky appetites get enough of the essential nutrients they need to be happy and healthy. Returning, for a moment, to the AGS study finding that older folks with poor appetites tend to favour sweets, it’s no mere coincidence that these beverages are formulated in sweet, ‘milkshake’ flavours, which can only make them more acceptable to the folks who need them.

As for food preparation, we can monitor the amount of fat and sweets used in foods we make for older folks. And we can make conscious efforts to include higher protein foods and veggies in their diets. I’ve come to the point that I blend grated Carrots, fresh Leafy Herbs and other complementary foods into my Meatloaf, Hamburger and Meatball recipes. It’s a well-known ‘trick for getting more veggies into your kids’ diets, but I think it’s an equally valuable tool for helping older folks get the amount and range of nutrients they need.