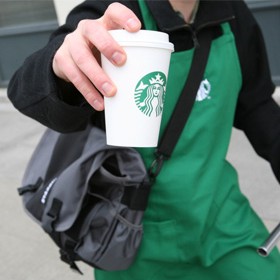 No, Really! Starbucks to Start Delivering?

I’ve often opined as one should get more for their money when buying a cup of Premium Coffee from somebody like Second Cup or Starbucks. Now, it appears that Starbucks, at least, is preparing to offer something of that nature. But I don’t know if it’s going to work, in the long run… 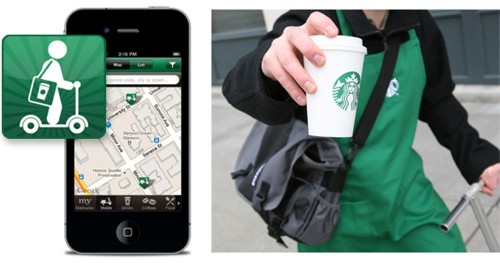 Yup… After trying just about everything else they could think of, Starbucks is
experimenting with delivery to your home or office as a means of
elevating its profile above the competition…

Let’s start at the beginning…

We’ve long bemoaned, in this space, the recent trend to resort to outrageous stunts or far-off-centre menu items to bring attention to one’s restaurant, in the face of growing congestion in almost all traditional food service market segments.

Witness the fads for ultra-hot Pepper concoctions, from Wings to Pizza, and the ridiculous lengths to which dessert purveyors have gone to cross one traditional sweetie with another, coming up with things like the Cronut and, then, the Wonut?

Okay… Another ultra-competitive food service market niche is the Premium Coffee sector. Here in Canada, that includes not only Starbucks, but home-grown players including Second Cup. And let’s not forget McDonalds push in the past couple of years to improve their coffee. If you’re Starbucks, how do you boost your profile above the clones?

For starters, you can toy with expanding your menu and adding a wine bar.

But if those ideas don’t fly – then what? I guess you start experimenting with home/office delivery. Yup. That’s what I thought. But, according to the above-linked post, that’s their next stab at enhanced individuality.

Sounds like a classic act of desperation to me!