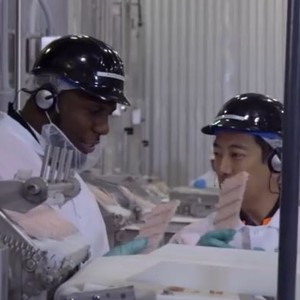 I thought I was seeing things when I scanned a Yahoo! post a couple of weeks back and read that former Mythbusters junior investigator Grant Imahara was starring in a video commissioned by McDonald’s about its post-Pink Slime Burger patty practices. Well, I’ve just seen him again! 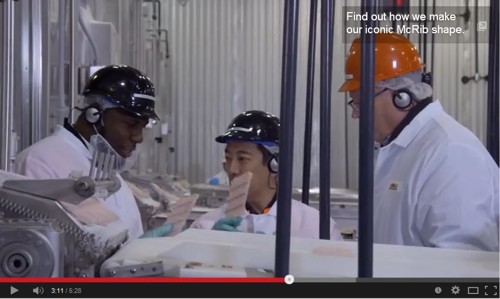 Grant Imahara and a skeptical guest inspect a finished McRib Patty at the end
of the production line. Some skeptics say it doesn’t even look like food.
No actual Pork Ribs are harmed in the production of McRib Patties.

Nope. It’s not a bad dream, or even a bad trip. It’s just former Mythbusters robotics expert Grant Imahara shilling for fast food giant McDonald’s in a series of ‘informational’ videos taking viewers behind the scenes at the plants where Burger Patties and, now, McRib Slabs are made.

I guess Imahara had to find some way to make a living after the powers that be at the Mythbusters franchise decided to cut the young sidekicks from the cast and focus exclusively once more on the senior stunt-men, Adam Savage and Jamie Hyneman, who pioneered the format in the first place. More to the point, I figure that Imahara and fellow youngsters Vittorio (Tori) Belleci and Kari Byron asked for big raises. Big mistake, in today’s TV universe!

In the McD’s videos, Imahara and various guests tour various McDonald’s manufacturing facilities ‘debunking’ the myths about what goes into McDonald’s food products. It’s clearly a move by the fast food giant to dispel the lingering myths about hooves, snouts, tails and other unsavoury Bovine Bits being ground up into Pink Slime and and extruded into McBurger Patties. All untouched by human hands, of course.

In the new McRib ‘exposé’, Imihara marvels at the quality of the Pork Shoulder cuts that go into the giant grinders, thence to the McRib foundry, making a point that there is not a speck of gristle or bone in the sample he and his guest are allowed to view. Not exactly an unbiased investigation. More like an extended commercial. Also, maybe, a sign of desperation from McDonald’s in its hard-fought but so far only marginally successful crusade to covert health-conscious millenniels and mothers to McCustomers.

My verdict? The video is ‘Pausible’, at best.