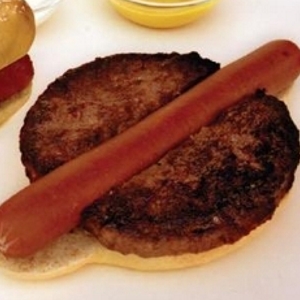 I thought I’d heard it all. I thought there was nothing that could surprise or intrigue me in the fast Food realm, anymore. I got to the point where I was seeing any new dietary outrage on a bun as just another pile of meat and toppings. But an Aussie entrepreneur has given me new hope… 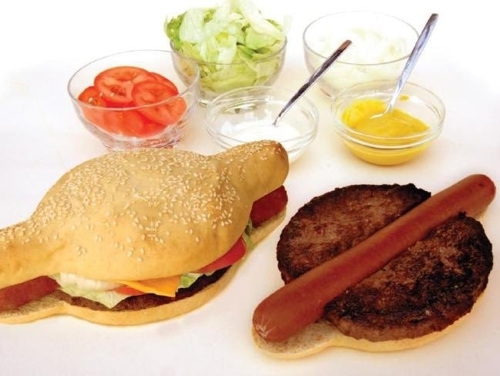 It’s so simple that most folks would never even think about it, much less try to patent it. It’s so clean and pure in design that it’s bound to be hailed as an instant classic. And it’s elegant, in its own peculiar way.

I refer to none other than the sleek, new HamDog!

As the photo above shows, it’s simply a regular Beef Patty cut in half and impaled by a jumbo Hot Dog. But it’s the special bun that truly makes the thing. And the unique blend of toppings: You get Lettuce, Tomato, cheese and Pickles plus three sauces – Yellow Mustard, Tomato Sauce and Mayonnaise.

The real story is how the inventor, Mark Murray of Perth, WA, got the ball rolling. He went onto Shark Tank, the Aus Version of the U.S. show of the same name, which is a spin-off of the long-running Canadian show, Dragon’s Den. There, entrepreneurs show off their inventions to a panel of investors in hopes of getting a partner.

The panelists liked the Hamdog but said that, to be a success, it would have to be patented and that something as ubiquitous as a combination of a Hamburger and a Hot Dog could never be patented. Besides it would take a whole team of lawyers and millions of dollars. They were wrong. Murray got his patent in the U.S. and is now preparing to sell franchises. He hopes to crack the U.S. market next year.

“Even [Boost Juice founder and Shark Tank judge] Janine Allis told me that it was impossible to patent. She’ll be eating her words now,” Murray crowed to reporters.

I say, congrats, Mark, for coming up with one of the most elegant and attractive new Fast Food ideas in decades!