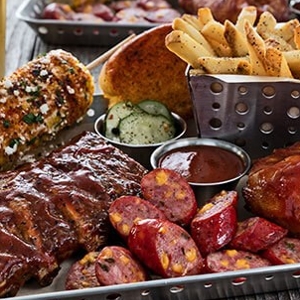 I’ve been railing for years against the millennial trend by restaurants toward crating crazier and crazier menu items, just to get the attention of customers in an age of ever-increasing saturation in the Fast / Hip / Extreme foods sectors. But there’s an underlying danger in these wild and wacky treats… 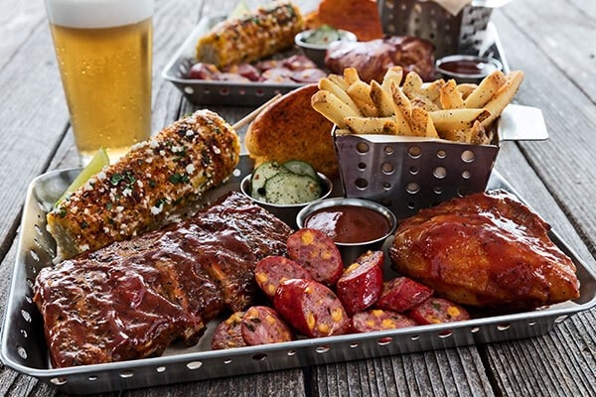 Chili’s Ultimate Smokehouse Combo: a full day’s worth of Calories, two days’ worth
of Fat and over three days’ worth of Sodium. It’s just nuts.

For the desperate restaurateur, seeking something new and unique to elevate his eatery’s profile above the crowd, the first rule seems to be, ‘Bigger is Better’. But therein lies a rub.

The more you put on the plate, regardless of what it is, the unhealthier the plate becomes. The unhealthiness exists on several vectors, notably Salt, Fat and overall Calories.

Chili’s Ultimate Smokehouse Combo is not a plate on a tray. It fills a whole tray. The Combo includes half a rack of Ribs, Fried Chicken, Sausage Rounds, Corn on the Cob, Bread, Fries and Pickles. The nutrient overload looks like this: 2440 Calories (more than a day’s total recommended allotment), 41 g Fat (two day’s worth) and 7,610 mg Sodium (almost three and a half days worth). Yikes!

A server in a restaurant where they offered a special selection of monster, high-Calorie/Salt/Fat menu items once told me,”Nobody actually orders them, except for show-offs who come in with their friends or the big, huge 1 per cent of customers who are too big to fit in a booth. The kind of guys who’d go into McDonalds and order half a dozen Big Macs and fries.”

I believe it. But I think offering these monstrosities is sending a dangerous message. People don’t refrain from ordering these dishes because they’re unhealthy, they don’t order them because they’re just so darned big. And the days of reheating leftovers the next day are long gone.Too much trouble for ‘modern’ young people and most of them probably wouldn’t know how, anyway. Not to mention the fact that common sense has gone the way of the dinosaur over the past fifteen or so years.

A dining companion who once accompanied me to a pig-out eatery to try the specialties of the house remarked, “They have these big plates on the menu, people are going to think anything less is healthy. You know, it’s okay.” Another colleague remarked, “If it’s on the menu, people will think it’s okay to eat it. Safe. Healthy. Like, if they put something on the Internet, it must be true.”

Are people that naïve?

Unfortunately, many are. Do we have to take the bull by the horns and protect them from themselves? I hope not. And I don’t know how we would do that, anyway.

What we an do is spread the word that huge, unhealthy menu items are novelty selections, designed to make a promotional splash, not really intended as part of a normal, healthy diet.

I don’t care what resto proprietors do to promote their businesses. I just wish consumers would think before they bite and take responsibility for their own health and well-being. I don’t want to read about somebody suing a resto owner over this issue claiming, “Your honour, I ate his food and I got fat and developed heart disease!” You have a choice! Make it responsibly!

2017-08-01
Previous Post: Walnuts May Be Healthier Than We Think
Next Post: McDonald’s Canada Gives away ‘Boom Box’