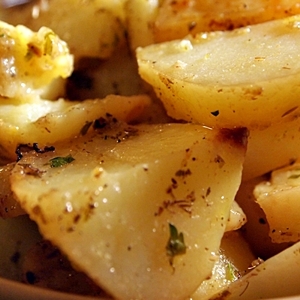 There’s nothing quite so characteristic of a Greek Dinner Platter as classic Roasted Potatoes. in Grecian cuisine, they treat Potatoes as a veggie on their own, not just another starch. And you’ll definitely agree with that view once you’ve made and tasted some real Greek Roasted Potatoes! 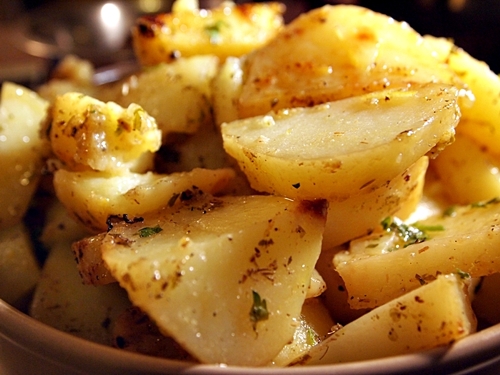 Classic Greek Roasted Potatoes: Such a cherished part of Greek Cuisine, they are
considered more than just a starch. You’ll get them on top of Rice when
you order an entrée platter at most Greek Restaurants!

What’s so special about Greek Roasted Potatoes? It’s not just one thing. I like to think that just the fact that they’re so easy to make and, yet, so flavourful and satisfying, is special!

What’s so special about Greek Potatoes?

On the surface, not much. It’s all in the details!

First you peel and quarter as many medium-sized potatoes as think you’ll need to feed your supper crowd. Two or three pieces per person is usuallu abouit right. (Cut your Spuds into six or eight, if your spuds are bigger. You’re looking for pieces about an inch / 2.5 cm thick and up to two inches / 5 cm across.) This is important: Dry them with a clean kitchen towel or paper towel.

Place Potatoes in a mixing bowl and drizzle a good amount of Olive Oil over them. Now, add Salt and Pepper – more than you would normally use.

Here’s the magic: Add two or three cloves of Garlic, finely Chopped, or run through a Garlic Press. Now crown with a drizzle of Lemon Juice and mix well with your bare hands.

Bonus: The Olive Oil will do wonders for dry, chapped skin!.

Finally, turn out the mixture into a baking tin or casserole dish in a single layer. Add a half cup or so of water or stock of your choice (to a depth of 1/4 in. / 1 cm) and sprinkle just a little coarsely chopped Oregano over the top.

Bake for an hour and a half at 375 F or until the Potato tops are golden and the spuds are tender inside. Don’t worry if you are already cooking something in the oven! You can bake your Greek Spuds at any temperature from 25 to 425. Just vary the cooking time to achieve the above-described state of ‘doneness’.

These great Roasted Potatoes go great with a whole lot of things! Don’t just save them for Greek Night!