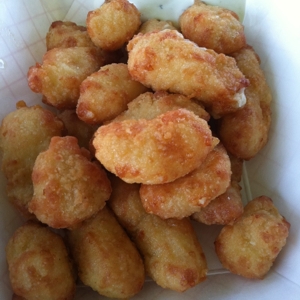 Call it Chapter 37 in the Menu Madness Saga. Or, ‘Why do we need this?’ McDonald’s is selling Deep-Fried, Breaded Cheese Curd in the Cheese Capital of America, Wisconsin. But isn’t this one just a re-tread of something old and familiar, and already passé as a Bar Finger-Food staple? 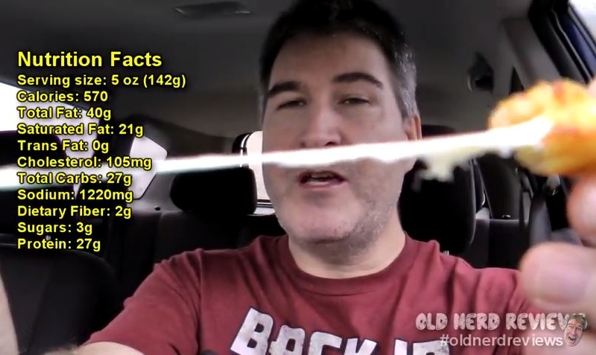 Thanks to The Old Nerd #oldnerdreviews for this still from his video review of
the ‘new’ McDonald’s Deep Fried Cheese Curds. More Calories
than a Big Mac and look at all that Sodium!

There’s an old saying that describes the needlessness, futility and downright absurdity of doing something which has already been done. ‘It’s like carrying coals to Newcastle’, the old folks used to say, Newcastle being a major British Coal Mining centre. So, I ask, why bring carry Curds to Wisconsin, a major American Cheese producing region? I can only guess that McDonbald’s brain trust figured that their new Deep-Fried treat would appeal most to the folks who most love Cheese. But early reports indicate that the limited-time trial is being well-received in Wisconsin, where a Milwaukee-only offering went state-wide this past Monday. If the idea flies, we might see the new menu item offered across the U.S. and, maybe, even Canada. But that’s just speculation at this point.

“Haven’t we seen this at least once, if not many times before?”

Of course we have, It’s just a new take on the old – even passé – Deep Fried Cheese Stick that was a universal offering on Bar Finger Food menus through the 90s. It couldn’t miss. If Cheese – a Salty, Fatty treat itself, was popular, why not add more Fat and Salt and Deep-Fry it? I say, that’s just carrying coals to Newcastle. And let’s not forget McDonald’s own Deep Fried Mozzarella Sticks of yesteryear! So, now, McDonald’s is doubling down on the coals – or Curds – bring its latest ‘creation’ to Cheese Country.

As that great-stater-of-the-obvious, Yogi Berra, once said, “It’s déjà vu all over again!”

A friend to whom I complained about this when I first heard the news suggests, rather astutely, that the McDonald’s marking people may reason that the current generation of high school and college students, who seem to rely on McFood for at least one meal a day, may be hoodwinked into believing Deep Fried Cheese is really a new thing. After all, they were barely born, let alone hanging out in bars, when the Bar Food version was in vogue. Maybe, but…

That’s the new term I’m coining to describe the lack of true creativeness among the Fast Food Giants in the face of ever-mounting pressure in their stiflingly-crowded market niche. McDonald’s, at least, has exhausted it’s natural store of creativity and is wallowing in Innovative Bankruptcy, grabbing desperately at any idea it was beg, borrow or steal from other Food Service niches that might fit its business model. I mean, the Fast Food giants all offer menus based on a limited number of basic ingredients – Buns, Burger Patties, Fries, Process Cheese Slices, Fizzy Drinks, maybe a Chicken Patty… There’s a limit to what you can do by shuffling those ingredients around to make new menu items, even if you add limited-time special Sauces and toppings.

I think the late 20-teens and the 2020s will be a time of shakeout in the Fast Food sector. Some of the current players will make it but others will succumb to loss of market share and Innovative bankruptcy. Let’s face it: We don’t need all the Fast Food brands that are in play now. All of them need continual growth in sales and market share to satisfy their greedy shareholders. The breaking point is near. Remember: You heard it here first!

2016-12-01
Previous Post: Some Secrets Of Authentic Chinese Food
Next Post: Why DO I Write All These Posts About McD’s?