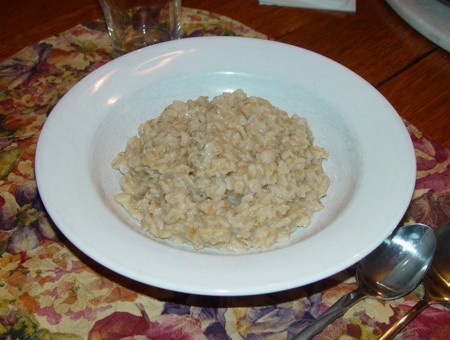 Make your own Oatmeal tradition!

Yes, good old oatmeal! Soul of the Highlands! Heart of the Haggis! Curer of many ills! And it might even lower your cholesterol! Oats have been a staple in the northern parts of the British Isles for centuries, simply because no other grain would thrive in their gloomy climate and short growing season.

Oats are extremely nutritious and have been used to feed people and their animals since the grain came to Europe from the Near East with human migration in the Bronze Age.The taste for oats has since been carried around the world by British explorers, soldiers, settlers and even convicts, transported to the farthest reaches of the Empire in the 19th century as punishment for their crimes.

One grain, many faces

You can feed oats raw, with the husks on, to livestock. Cattle and horses, especially, love ’em! You can grind them up into flour and make oat bread. You can use the bran itself as a fibre supplement. But one of the main ways we eat oats is as Groats. That’s the oat kernel, after the husk has been removed, kilned (heated to reduce its moisture content and preserve it), and then rolled flat whole or ‘steel cut’ into smaller pieces to facilitate cooking.

Rolled oats is the version we usually use for making old fashioned oat cakes, stuffing Haggis (I know, I know…), baking cookies, toasting up Granola or mixing up Muesli, and simmering into good old fashioned porridge.

The word ‘porridge’ goes back nearly as far as the grain itself. In parts of Ireland, they call it ‘stirabout’ – because that’s the key to good oatmeal – constant stirring while it slowly simmers, absorbing the water or milk you use to cook it and developing a creamy, thick sauce.

You’ll also want a suitable stirring utensil. The Scots prefer a Spurtle – a round stick about half an inch (1.5 cm) in diameter and at least a foot (30 cm) long. It is usually made of maple, oak or birch. I use the handle end of a long (maple) wooden spoon. Works great! But don’t use the actual spoon end! it just doesn’t work properly. And don’t use plastic or metal handles. There’s just something about how wood interacts with the developing porridge… Just trust me on this!

Bring the water and one good pinch of salt to a rolling boil in a medium or large saucepan. Add the oats in a gentle stream while stirring. Keep stirring. Wait until the pan comes back up to the boil, then reduce the heat to a nice gentle simmer. Keep stirring. It’s crucial to keep the oats moving. Practice writing your initials in the proto-porridge with the stir stick. Do figure-eights! Try Guinness ‘shamrocks’ or coffee house ‘leaves’… Just keep stirring.

The magic starts about five minutes after you turn the pan down to simmer. The liquid starts to turn cloudy and thicken, and the oat flakes themselves begin to puff up as they absorb water. At the same time, they are giving off starch and other good things, including vitamins and soluble fibre. 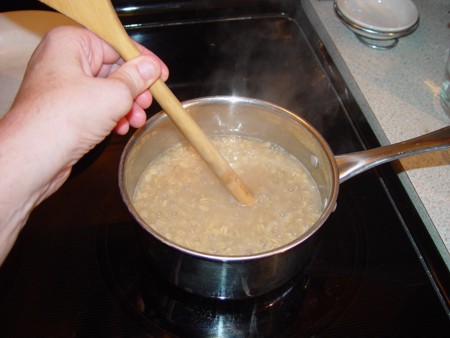 Are you still stirring? Good…

If you use regular Rolled Oats, you should start tasting for Salt and sampling for ‘bite’ about 20 minutes in. Keep stirring. Add a little hot water if the ‘sauce’ gets too thick before the oats are tender. If you use ‘quick’ oats, you’ll get to this stage much faster, perhaps 5 to 8 minutes in.

‘Quick’ oats are quick because they have been par-cooked, breaking down the starches in the groat most of the way, then dried out again for storage and shipping. You may find that ‘quick’ oats reach the ‘al dente’ stage before they get a chance to develop the the creamy consistency that regular rolled oats do. No problem. They’ll taste just fine. But I miss the traditional creamy texture. Keep stirring.

Your traditional style porridge should be ready in 25 to 30 minutes. You can stop stirring now.

Remove the pot from the heat, spoon the porridge into shallow rimmed soup bowls and allow your diners to top with Milk and Brown sugar as they please. Some folks do it differently. My old Scottish Granddad preferred a small bowl of milk on the side and a pat of butter melted on the crown of his oatmeal. Who’s to question? Experiment! I’ve tried Honey and Maple Syrup on mine. Even Seville Orange Marmalade. With and without Milk. Some swear by a pinch of Cinnamon or Nutmeg. Fresh fruit is always acceptable. Not to mention dried fruits and nuts.

Eat it your way. But do eat it! And enjoy the ritual of making it properly. Get the kids involved in stirring! Stirring the porridge was one of the first things I was allowed to do in the kitchen when I was little. Make this ages-old favourite one of your family traditions!