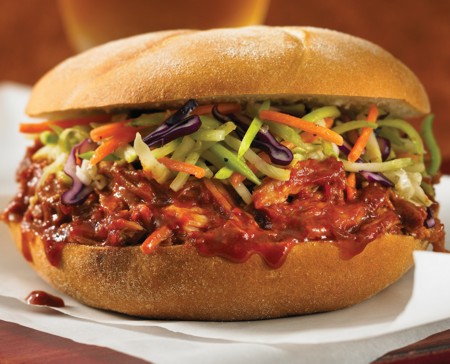 By: admin
In: The Smokehouse

It’s a folk classic from the Carolina Hills. And, like so many folk classics, it has it’s roots in the simple Smokehouse tradition of “low and slow” cooking – just one of the techniques Po Folks invented to make cheap cuts of meat tender and flavourful!

Yep. It was Po folks who invented BBQ, Smoking, Stewing, Braising and other cooking styles we now use to create some of our ritziest dishes. Back 150 or 200 years or so ago, Rich Folks got the prime cuts – Loins, Legs and Chops – and the Po Folks had to make do with scraps – Shoulders, Bellies, Ribs and Briskets.

Closely related to these cooking techniques are the sibling arts of Rubbing and Marinating. While both impart iconic flavours to meat, Rubbing also tenderizes somewhat through the mechanical action of the massage, while Marinades can tenderize passively if they contain a significant amount of acidic ingredients or certain enzymes from Papaya or Pineapple.

Purists say only a Pork Shoulder (sometimes called a Butt or a Boston Butt) is the only way to go. I agree. There’s lots of soft white pork fat in the cut and that can be used to advantage by the astute Chef to self-baste the meat as it cooks. Fat, as any good cook knows, is flavour. And slow roasting makes it magnificent!

And get a bone-in shoulder. It will probably be cheaper than a boneless one and cooking it with the bone in will help this large cut roast evenly all the way through.

You can find any number of “Carolina Pulled Pork Rubs” just by Googling that phrase. I won’t go so far as to reveal all the details of Maggie J’s House Pork Rub blend, but I can tell you this much: The following recipe is a good place to start tweaking your own signature flavour profile!

Note that the emphasis here is not so much on “hot” as on “savoury”. Pork is, after all, “the other white meat” and we should always remember not to walk all over its own delicate best qualities in pursuit of flavour excellence.

I’ll be the first one to stand up and challenge any recipe that lists a dozen or more ingredients. I’m a big fan of simplicity. I try to keep my own recipes to half a dozen ingredients or fewer. For example, the main flavours in Tex Mex cooking are Chili Pepper, Garlic, Onion and Cumin. Some BBQ and Smokehouse Artists, however, swear by “secret recipes” that call for 20 or more ingredients. In the end, it all depends on what you like.

In Morocco, every cook has her own special Ras al Hanout, or spice blend. These blends generally have 12 to 15 ingredients. (My Ras has only five ingredients.) Likewise, in India and it’s bordering South Asian neighbours, there are almost 30 distinct culinary styles. All have their own special flavour signatures and, within those pockets, every serious cook has her own house spice blend, or Masala.

Leave the fat cap on the Pork. When it goes on the smoker, place it fat-side up. It’ll baste itself beautifully, slowly, gently for hours. You may want to cut criss-cross slits in the fat cap so the rub can penetrate it better and the fat can render more readily.

On a big cutting board or in a large roasting pan, massage the Pork all over generously with the rub mixture. Give it a good, heavy coating; use all the rub mixture. Now… You can let it rest overnight in the fridge, wrapped tightly in plastic wrap, before cooking or go right onto the Smoker. I like to let the meat rest. If you do, let it come back up to somewhere around room temperature before putting it on the heat. 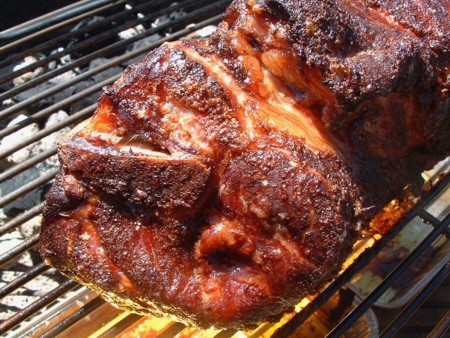 Your finished Smoked Pork Shoulder should look something like this…

There are two paths to take while cooking. One is to leave the meat on the smoker at 225 F to 250 F for 8 to 10 hours, until it’s fall-off-the-bone tender. The other way – if you like your smoke flavour less pronounced – is to smoke it for 4 hours or so and then place it in a suitable sized roasting pan with about a litre (quart) of water or fruit juice in the bottom to act as a braising liquid. Cover with heavy duty aluminum foil and place it in your kitchen oven at 325 F to 350 F for another three or four hours, until it’s fall-off-the-bone tender.

Any Pulled Pork Lover will tell you, you can’t have a PP feast without the right trimmings.

Fresh Sourdough Bread is a classic accompaniment for any BBQ or Smokehouse treat.

Cole Slaw is a must in the Carolinas, and fold down there customarily put a big spoonful right on top of their pork. If the recipe for Maggie J’s Famous Confetti Cole Slaw is not posted on the Fab Food Blog as you read this, it will be soon!

There are many, many ways to serve Pulled Pork. You could cruise the Internet all day and still not exhaust all the possibilities. But “on fresh Bread with Slaw” is by far the most favoured by PP fans. However you eat it – and you will be tempted to get up in the middle of the night to “pull” yourself a snack! – you’ll never tire of its melt-in-the-mouth, finger-licking-good flavour!

Or… Just call us!

Now, you may want to play around with rubs and marinades and slow smoking. Some people play golf or have a sailboat. But if this all sounds a little confusing, or too much trouble – or just plain crazy – remember that we’re already doing it! Your next Pulled Pork (or Texas Brisket, or Smoked Ham or Smoked Turkey) “pig-out” is as near as your phone! Order 9:00 to 5:00 Monday to Friday at 613-440-4107…