The current food crisis has officially been deemed ‘desperate times’ by some nutrition experts and economists. But have we reached the point where folks unable to feed their families are resorting to ‘hilarious’ measures to make ends meet? 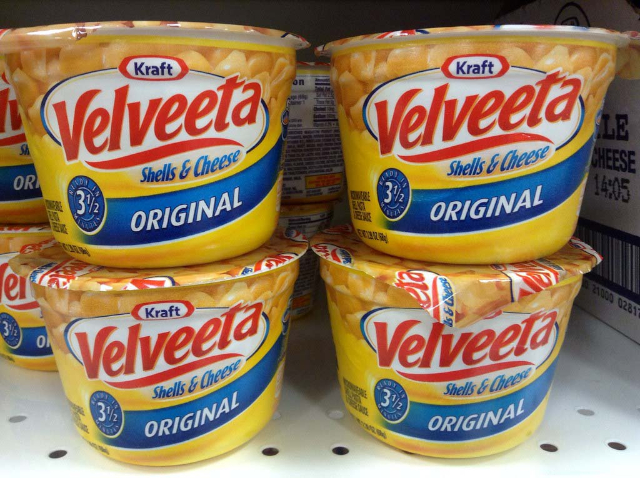 What it’s all about: Half an 8-pack of the inflammatory product…

In the latest case, do you agree with the extreme-reaching attempt by a South Florida woman to squeeze Kraft/Heinz company for a minimal $5 million over an instant noodle product that apparently takes 2 minutes longer than claimed to cook?

The plaintiff, identified as Amanda Ramirez, of Hialeah, Florida, claims the product, Velveeta’s Shells & Cheese cups, actually takes more like 5.5 minutes to cook than the 3.5 minutes stated on the package.

My take: Who cares?

What’s 2 minutes out of your day that you could be using to do something else while the cup is heating, anyway?

Ramirez disagrees. In her lawsuit she states:

The suit, filed in the U.S. District Court in Miami, states that that Kraft/Heinz is enriching itself unfairly: “As a result of the false and misleading representations, the Product is sold at a premium price, approximately no less than $10.99 for eight 2.39 oz cups, excluding tax and sales, higher than similar products, represented in a non-misleading way, and higher than it would be sold for absent the misleading representations and omissions.”

How does the Ramirez suit stack up…

… Against previous such complaints?

One observer who has followed a number of other food industry ‘false and misleading advertising’ cases calls the whole thing not just absurd, but ‘hilarious’. Influencer Ayomari writes, in his blog:

“The reasoning is hilarious, as Ramirez purports that the cooking directions, which states ‘Ready In Three ½ Minutes’, doesn’t account for the time it takes to remove the lid, add water and stir the cheese sauce.”

I would venture that this new suit is even weaker than the famous case in which a McDonald’s customer sued after being scalded by a spilled cup of coffee. Weaker even than another in which a customer sued Subway because the company was selling subs whose buns were not ‘a full foot long’. At least, in those cases, there was some palpable, demonstrable damage, as minor as it might have been considered by some observers.

Do you suspect, as I do…

… That Ramirez may just be trying to recoup some cash to ease the pressure on her food bill as prices soar out of sight? That high-profile Kraft/Heinz and its flagship product simply provide a convenient target?

I can’t prove anything, of course. But there’s also the possibility that sheer frustration is playing a part in the whole thing. There’s little you can put on a plate that’s as cheap, tasty and filling as instant Mac and Cheese. But I would have to agree that, at $10.99 for 8 individual servings, the packaging and instructions should at least accurately portray the preparation time and effort required. Particularly at this touchy, trying time and place in history.

I also wonder if this is just the first of a new generation of ‘hilarious’ food cheating suits to come, as consumer desperation continues to build? Furthermore, I worry that some folks are not only betraying extreme distress, fear and desperation over food prices: Their latest reactions to the worsening situation may be bordering on the downright delusional.

History has shown that, when things get darkest, folks will grab  at the skinniest, shortest of straws. This at the same time as former U.S. President Donald Trump has announced he’ll run for President again in 2024. Sends a chill up my spine.