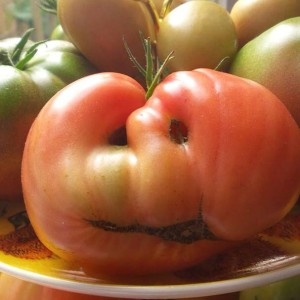 Do you have any idea how much perfectly good produce we in the Western World reject, discard and plough under every year? Here’s a clue: It’s more than we actually consume! It’s time for us all to embrace ‘ugly’ food and send more down the line to feed those who are currently going hungry!

The apple on the right is just as fresh and juicy and delicious
as the one on the left.

There’s a compelling article in this month’s National Geographic which illustrates clearly just how much food we waste – simply because it doesn’t look perfect! Anyone with experience in the food service sector knows that veggies and fruits are sorted and sold by size and, often, graded by appearance. If a particular piece of produce doesn’t fit one of the ‘standard’ size, shape or colour cubbyholes, out it goes. Uniformity is a quality prized above gold.

Now, there’s nothing wrong with those ‘sub-standard’ foods. They’re just as nutritious and delicious as their prettier counterparts. They just don’t pass the glamour test. On the other hand, they take just as much water, field space, growing time and other ‘inputs’ as their brothers and sisters that make the grade for retail sale. The National Geographic article sums it up almost poetically:

After all, nearly 800 million people worldwide suffer from hunger. But according to the Food and Agriculture Organization of the United Nations, we squander enough food—globally, 2.9 trillion pounds a year—to feed every one of them more than twice over.

Food service sector people can source ugly foods from local producers who would otherwise toss them out or plough them under. Think about it… It makes no difference what a raw carrot looks like when it’s going to be used in mirepoix or shredded for salad anyway. Ditto, especially, tomatoes destined for sauce! The opportunities are endless…

Food processing companies can certainly step in and offer to buy – and process – less than perfect produce. By the time they get through with it, you can’t tell what the original fruit or veggie looked like, anyway!

As consumers, we can tell the food retailers that we will buy ugly fruits and veggies – but we expect a discount over what we’d normally pay for ‘perfect’ produce. And here’s where a recent trend comes into play.

Loblaw’s supermarkets in Canada are pioneering a move to sell ‘ugly’ foods at retail. They’re currently evaluating a pilot project and company spokespeople have announced their intention to expand the ‘Naturally Imperfect’ line of produce in the coming weeks. Loblaw’s shows it’s appreciation for your decision to buy produce that would otherwise go in the trash by pricing it up to 30 per cent less than the ‘first line’ fruits and veggies. I’m all for that!

So, tell Loblaw’s they’re doing it right and buy Naturally Imperfect produce! We all win!