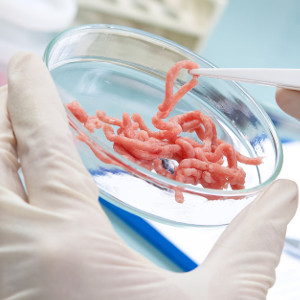 Alt.Protein Beat: Lab-Grown Meats Back In The News

While virtually all the buzz about alternative proteins these days is coming from the plant-source sphere, other players are starting to demand a greater share of the ‘voice’. Enter, the lab-grown meat promoters…

Lab-grown ‘meat’ protein: Real meat without the cruelty or controversy…

They’re back! And it sounds as though they’ve been busy in spite of not making much news or touting many new triumphs lately.

I’m talking about the folks behind the lab-grown meats movement. And I have to admit, they have some big news.

Culmination of decades of work

The lab-growing of real meat proteins has kept a number of hard-core supporters busy for a couple decades. Now, it appears that a few big boosters have taken the plunge and committed to try mass-production. On what do they base their burgeoning enthusiasm?

First, the ground has been thoroughly prepared for them to make their touchdown run. The US-Food and Drug Administration (USDA) finally granted official approval for ‘lab-grown meats’ to be produced and sold for human consumption. That sparked lab meat pioneer UPSIDE Meats to address a joyful letter to the ‘Dear chickens of the world’:

“You may be dismissed from the dinner table.

“Why? Well, we have some juicy news for you. UPSIDE Foods has received a ‘No Questions Letter’ from the FDA. That’s good news for everybody—for the entire world, really. But for you? For chickens? It might be the best news ever. Let me explain.

The ‘Me’ in the foregoing statement is UPSIDE CEO and Founder Uma Valeti, M.D.

“UPSIDE Foods makes cultivated meat. It’s not vegan or vegetarian, it’s delicious meat grown directly from animal cells. That’s right—animal cells. It might sound crazy, but it’s based on a simple principle: animal cells are the building blocks of the meat that we humans love so much.”

How they do what they do

UPSIDE (and other lab-meat players) take just a few of the right kind of cells from real chickens to get their process started. Then they put those cells in the right growing environment with the right nutrients and – presto! – the cells multiply directly into blobs of real chicken protein that resembles ground meat, and is ready to be used as such.

As lab meat promoters have often pointed out, their process sidesteps contentious questions surrounding the raising of conventional chicken. The big ones that traditionally concerned animal rights crusaders include: battery vs. free-range housing, mega-culls when certain ugly diseases invade the coops, cruelty in slaughtering processes, and related issues.

The letter goes on…

“So what does getting a ‘No Questions Letter’ mean, exactly?” the UPSIDE letter to chickens asks. “It means that the FDA accepts our safety conclusion, and UPSIDE’s cultivated chicken will be available [immediately] following USDA inspection and label approval. It’s an important step on the road to bringing cultivated chicken to the market in the U.S., and gets UPSIDE closer to being on tables everywhere.”

The sentiments are echoed in a parallel FDA news release:

“In addition to meeting the FDA’s requirements, including facility registration for the cell culture portion of the process, the firm will need a grant of inspection from the United States Department of Agriculture Food Safety and Inspection Service (USDA-FSIS) for the manufacturing establishment. Additionally, the food itself requires a mark of inspection from USDA-FSIS before it can enter the U.S. market. As this product comes closer to entering the U.S. market, we are closely coordinating with USDA-FSIS to ensure it is properly regulated and labeled.”

Now that it has made it through the first ‘cultivated meat’ company/product evaluation process successfully, the FDA appears ready to jump in with both figurative feet and work with others.

“The FDA is ready to work with additional firms developing cultured animal cell food and production processes to ensure their food is safe and lawful under the Federal Food, Drug, and Cosmetic Act. We encourage firms to have these conversations with us often and early in their product and process development phase…”

So prepare yourself for a rush of announcements from other developers of lab meat processes and products in the coming weeks and months.

Next, cultivated meat crusaders will have to steel themselves for the inevitable clash of steel on the marketplace-battlefield, where they’ll ultimately have to win over a viable share of ‘non-traditional protein’ consumers.

But even when the dust has settled and the marketplace has stabilized, the ground will continue to shift subtly under our feet. There’s still the reality lurking in the wings that plant-based meat substitutes and cell-cultured meats will at best be only bridging technologies for the great masses of humanity who will be learning how to use plant-based proteins in their ‘raw’, close-to-nature forms.

Which is not to say the new meat substitutes will be totally unsuccessful. Just like chocolate, they’ll probably become high-end indulgences for the very rich, and will be priced as such…