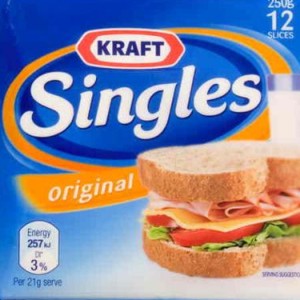 Kraft Foods, in the U.S. at least, is saying demand from consumers, as reflected in recent polls, has convinced them to remove some highly criticized additives from its famous ‘American’ (‘Process Cheese Food’, to the rest of the world) slices… 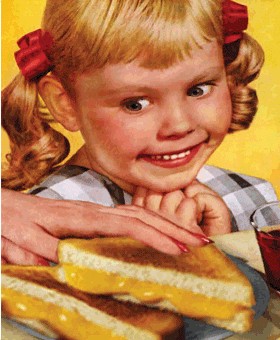 So why is Kraft messing with one of its most famous products? Seems customers overwhelmingly voted for the removal of artificial preservatives from the cheese-like slices in a recent company survey. Kraft had already removed artificial colourings from its cheese-style products, including their other cornerstone brands – Kraft Dinner (which uses a powdered version of Processeed Cheese Food), Velveeta (in the big 900 g / 2 lb. ‘loaf’), and Cheez Whiz (the spreadable version)… They’re all Kraft products.

What is ‘American’ Cheese?

They call it “American’, because an American food experimenter – none other than James L. Kraft, himself – first patented the process by which real cheese is cooked with Vegetable Oil, milk fats, milk solids, colourings and other additives to become a consistent, soft, easy-melting concoction that tastes something like the Cheddar and Colby from which it originated. Because there’s so little actual cheese in it, and makers often use cheese that doesn’t meet the standards for sale on its own, ‘American’ – better known as Process Cheese Food to the rest of the world – is somewhat cheaper than real cheese. In addition, it’s literally ‘engineered’ for sandwiches and topping burgers. Kids love it because it’s soft and doesn’t have a strong, distinctive flavour.

It means precisely nothing if you’re a foodservice industry person, a trained cook of any stripe or someone who simply appreciates good food. You won’t be going anywhere near the stuff, anyway.

But if you’re a Mom, a kid or the family BBQ Guru, you’ll be watching and waiting with bated breath.

The company says the change, from an artificial preservative to a ‘natural’ one, won’t change the colour or flavour of its cheese slices. We’ll see whether ‘Cheese Food’ lovers can tell the difference.

For Kraft’s sake, we hope they can’t. After all, cheese products like KD and ‘American’ slices and Cheez Whiz and Velveeta (‘American’ in a block) constitute the lion’s share of their brand Profile and a big hunk of their profits.

Process Cheese Food Products may not be the best thing for you, dietarily, but they’re mostly harmless and convenient and – what the heck! – a tradition in most homes. And I say, if it keeps the kids happy, let ’em have it now and then!