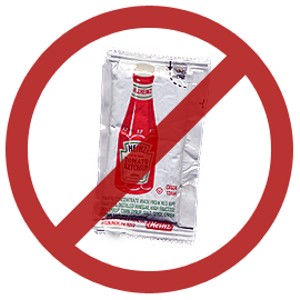 Ketchup Etiquette: To Glop or Not to Glop?

Oh, ho! This is just the razor-edge of a culinary slippery slope that has plagued diners and restauranteurs since time immemorial! Since Chefs first organized their kitchens on the pseudo-military ‘brigade’ system, the Chefs (read: Generals) have felt it their duty – nay destiny! – to dictate to diners how to consume their creations… 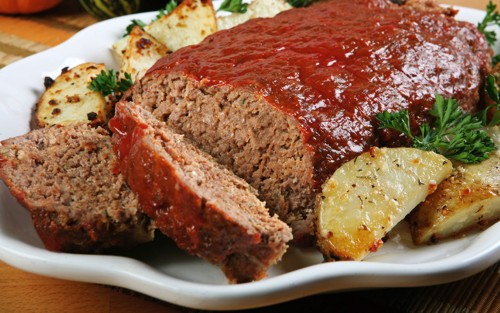 Meatloaf would never be the same without Ketchup…

“Thou shalt not use Ketchup in this establishment” Thus, reportedly, reads the new edict in many eateries around the U.S. Just try asking for Ketchup at Mad Fresh – An American Bistro in Ft. Myers, FL. Their menu stolidly states:

“We know, we know. People love their ketsup. But honestly, be ready. If you’re over 10 years old, ketsup will NOT be provided. Similarly, salt won’t be making an appearance next to your meal, either. We simply ask that you trust us. We know what we’re doing! Part of the MAD experience is to trust the chef, and not have preconceived notions of what your dish is going to need.”

Similar prohibitions have been declared by a whole flock of restaurants along the mid-Atlantic Shore, principally in Delaware and Maryland. There, they sing the praises of Malt Vinegar as the condiment of choice for their many and varied Deep-Fried Seafood delights.

And it appears that this trend – or revolt – among Chefs is spreading.

Elsewhere, no less an authority than the National Hot Dog and Sausage Council (NHDSC) states in its Dos and Don’ts for eating Tube Steaks:

“Don’t… Use ketchup on your hot dog after the age of 18. Mustard, relish, onions, cheese and chili are acceptable.”

Some will applaud this courageous stand, but others – a majority, I predict – will stage a counter-revolt. How will they express their equally-strong but contrary views about Ketchup? Perhaps they will simply boycott eateries that refuse to provide ketchup. Some may go even further and bring their own ketchup to restaurants which defy their will.

There are those among us who feel that a French Fry without Ketchup is not a real French Fry. There are also many – albeit, in the main, over the age of 60 – who won’t eat eggs without a generous dollop of the red stuff on the side. And what about Grilled Cheese? Without Ketchup? I don’t think so! And what of the millions of mothers around the world who dress their meatloaf with sauces consisting chiefly or solely of Ketchup? Meatloaf would never be the same!

The moral(s) of this story: