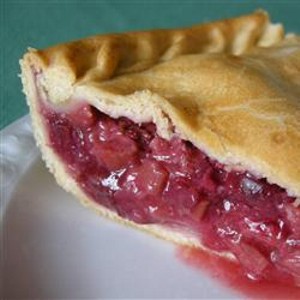 Give Rhubarb the Respect it Deserves!

The local Rhubarb is on store shelves (and in every second back yard garden) in the part of the world where I live! That’s great news. We have about a month to savour this unique plant’s sweet-and-sour delights until the weather gets too warm and the stalks shoot up to blossom and go to seed… 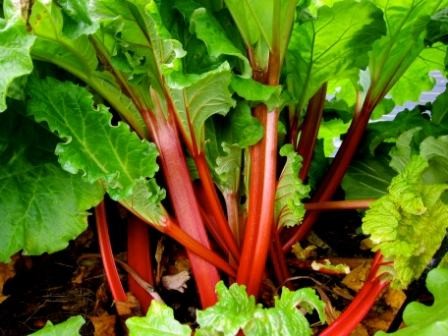 A Rhubarb crown, with a bumper crop of red, ripe ‘stakes’ ready for pulling!

We’ve gone into the myriad ways to prepare and enjoy Rhubarb in previous posts here at the FFB. But, aside from sounding the starting bell for this year’s fleeting crop season, we’re posting again to delve into the here4tofore mysterious health benefits of this oft-times misunderstood and under-appreciated veggie.

…Not a fruit! It’s more like a kin to Kale and Chard. Unlike the latter veggies, we use the stems of Rhubarb exclusively, not the leaves. In fact, Rhubarb leaves are toxic. So make sure you trim every bit of leafy green off the tops of your Rhubarb ‘stakes’ before washing and cooking.

Pick them by pulling straight up on the stems. They should come free of he root ‘crown’ fairly easily if they are properly ripened. Once picked, they will not continue to ripen, and under-ripe Rhubarb tends to be stringy, hard and even more sour than the ripe stuff.

What do you get?

Rhubarb has been known around the world 9in one form or another) for hundreds if not thousands of years. It was adopted as a medicinal plant in the west after Marco polo brought back the bounty of the Orient to Italy. At that point it was revered as a diuretic.

Today, we prefer to call it a food and we can look forward to a plethora of benefits from its consumption:

So, revisit the link above to our previous Rhubarb omnibus post today – and unlock the pleasures of Rhubarb in a blinding array of recipes and flavour combinations!