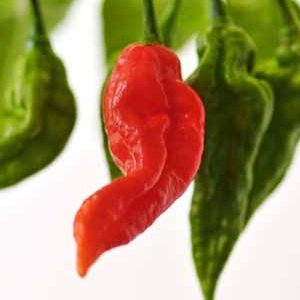 A Texas Scoutmaster has taken his life in his hands, creating and executing a Hot Pepper Challenge the likes of which we’ve never before seen. Setting a poor example for the impressionable young? Perhaps, but his heart – if not his mind – is in the right place…

Identified only as Johnny, the Assistant Scoutmaster from Troop 137 of Fredricksburg, TX, decided to video himself downing 23 Ghost Peppers in one sitting. I’m not kidding. One or two have sent people to hospital as a result of other Hot Pepper Challenges. Ghost Pepper is one of the hottest naturally-occurring Peppers and really isn’t meant top  be eaten. it works better in Police grade Pepper Spray.

The idea was to make the daring vid, post it on YouTube, raise money through views and hope it went viral. The funds would go toward Scout troop scholarships, uniforms, and trips. No word, yet, on how they’re doing financially but I just checked and they have more than 30,000 views already. I’ve embedded the video above so you can contribute in your own little way by watching it.

Yes, I said ‘taking his life in his hands’

Ghost Pepper, known formally as Naga Bhut Jolokia, is definitely hazardous. It can register up to 1.4 million on the official Scoville Heat Units scale. Your every-day Jalapeno comes in at a measly 5,000 to 6,000 Scovilles on average. So how did the Scoutmaster manage to eat 23 of the hot-hot-hot ones?

I surmise that the  fellow, being from deep Southwest Texas, just an hour north of San Antonio, is used to your run-of-the-furnace Hot Peppers, having been exposed to them his whole life. The  more you eat Hot Peppers, the more you become ‘used to’ them. Or, the more they stun the heat/pain receptors in your mouth and brain. Whatever the reason, he was able to ingest a record number of the Peppers. Twenty-four hours after the stunt, Johnny was reportedly still sick in bed, recovering.