The state of California has said it will implement this fall an already approved program to ensure that all kids get a decent breakfast and lunch. The Los Angeles Unified School District is providing even more help, making three free meals a day available to students… 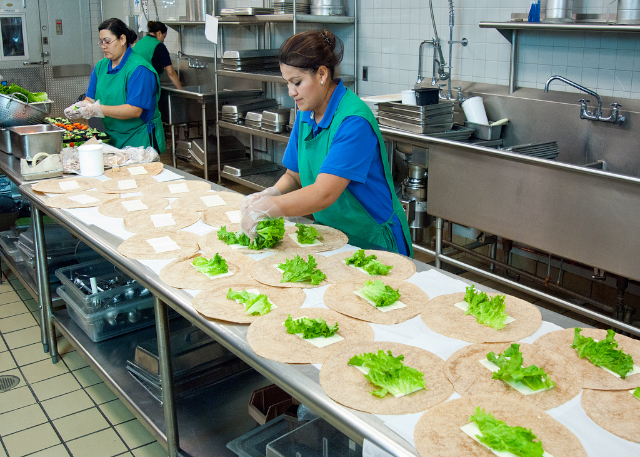 Prepping school lunches: This fall, in Los Angeles, kids will
get three squares a day on the taxpayer’s tab…

It’s an extension and intensification of a program last year instituted with the financial aid of the federal government, which kicked the lion’s share of the bill. This year, there’s a new California law on the books stating that all school-age kids will be provided two, “nutritiously adequate school meals,” Monday through Friday, with state taxpayers footing the entire bill. That’s where the intensification comes in – the state takes full financial responsibility.

And this initiative gets the kids fed even of they’re eligible for the exisiting National School Lunch Program, which provides free or reduced price meals, depending on a family’s resources.

“Only in California,” you say? Nope. Maine is already heading down the same path, with a similar state-funded program scheduled to activate later this fall. And more states are sure to follow suit.

School breakfast and lunch programs have always been predicated on the principle that growing kids pay more attention, understand subject matter better and, therefore do better in school.

According to a story in the L.A. Times, “The Los Angeles Unified School District says that more than 81 percent of its students come from families who qualify for the federal school meal program and may be facing food insecurity. Statewide, an estimated 60 percent of public school students qualify.”

That’s a lot of kids. More importantly, a lot of families who apparently can’t afford to feed their kids – or, presumably, themselves – properly.

The expanded California and Maine school meal programs are admirable in their intent and commitment. But I have a real problem with the whole concept. Feeding kids free meals at school doesn’t make their families any more financially secure. And that’s the big fat issue – or rather the skinny, starved elephant in the classroom – that underlies the problem.

The real issue is, the economy has evolved to the point that the one percent have most of the wealth while masses of ordinary folks can’t afford to pay their bills and feed themselves. Something’s got to give soon, or – in theory at least – the wealthy will have all the wealth, and the rest of us will have nothing. Except bills and credit card debt.

Be brave! Take the broader view!

Many non-rich people say President Joe Biden has the right idea: fund desperately need public works, economy-rebuilding and social relief programs by charging the rich a flat 15 percent tax. Should they not be giving back in proportion to the good fortune that their participation in the U.S. Dream has rewarded them?

The Biden-backed 15 percent flat tax on the rich can generate billions – maybe even trillions – in desperately needed cash which can be pumped back into the economy getting it moving again. After all, it’s not having money that makes the economy strong. It’s having the money moving, circulating in productive ways.

The only alternative seems to be an oligarchy under which the privileged few live in absurd luxury while the masses just get by from month-to-month. As long as the average Joe and Joanne can’t get ahead – that is, banish their credit card debt and start saving for their retirement, their kids’ educations and so on – the U.S. (and by association, the Canadian and European) ‘systems’ will go the way Russia has. And the big economic institutions will start to falter…

There’s a breaking point to all ‘good things’

You can’t make money selling cars when folks can’t afford them. For example, the prices of used cars are already skyrockeyting while new car sales are down. Have you noticed that the car ads on TV, billboards and so on – have segued exclusively to luxury models? Makes sense. Only the rich can afford new cars.

How about housing? Condos are now more inexpensive, and in some cases much costlier to own, that private homes. There’s a real-estate price ‘crisis’ going on, too, if you listen to the real estate sales people. Folks are dumping tens of thousands of houses on the market. They’re attempting to bail themselves out financially with some quick cash and avoid he crushing mortgage rate increases projected to start next year. Home sales is another huge segment of the economy that’s heading for the dumper.

And look at consumer product sales. Folks are making do rather than buying new when something breaks down or ‘goes out of fashion’. Consumer products advertising is up sharply as brands try to preserve, or carve out larger slices of the diminishing pie. I’ve never seen so many ads on TV. Almost more minutes per hour than the programs themselves. Just look at CNN in prime time.

Food at the heart of the storm

And that last point applies just as much to Fast Food and major brand supermarket foods as it does to shoes or vacuum cleaners.

Food prices have soared as much as 10 percent over the past 12 months, and threaten to go higher. And industry observers say there’s only a ‘chance’ prices will even start to moderate by next spring.

Supermarket chains have kept up the defensive measures they adopted during the COVID crisis, like restricting brand choices. And manufacturers are still making fewer varieties of their respective products. The pasta sector is a good example: Italpasta and Barillo (among others) have cut back to making fewer than 10 of their most popular pasta shapes, rather than the up-to-60 they once offered. That’s easier and cheaper for them and provides an the opportunity to blame ingredient shortages and transportation problems for open spaces on the shelves.

I think the only way to go is, bite the bullet and go with the Biden economic model. If the money is stagnant it does nobody any good. Except maybe the mansion and mega-yacht builders.