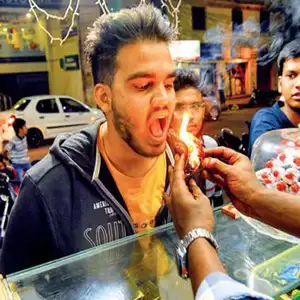 While I was researching my second Street Food of Indian post for yesterday’s week-starter, I ran across a so-called fad. The very idea of which struck me as dangerous in more than one way. Would you consider eating something called ‘Fire Paan’?

,
First, let me correct myself. I called Fire Pann a fad in the intro teaser. Then, after reading several more stories about this quirky, potentially dangerous edible, I learned that Paan without the fire has a relatively long and distinguished history. The main article I used for basic reference, which called Fire Paan a fad, was dated 2017, when the fad was on the rise. But Fire Paan is still a ‘thing’ especially in Northern India, in 2022. And it’s apparently spread to other parts of the world.

“The fire paan combines spices, dried fruits, nuts and sugar which is then set on fire and thrown straight into the mouth of the customer by the street vendor,” a post at getbengall.com tells us. That’s about it. Except, the author left out a key clcment: Fire Pann also contains Betel Leaf, a psychoactive substance that can cause severe reactions in  some users.

Betel leaf has been consumed by millions across Southeast Asia for centuries, usually chewed with Areca nuts and slaked lime. Call it the Coca of the East. But while chewing coca leaves is generally confined to the folks at the lower levels of the social pyramid in the South Western Hemisphere, the stuff is commonly served as an after-dinner sweet. Chill out with some legal dope, rather than segueing to after-dinner apéritifs and cocktails like they do in New York or LA.

“Chewing Paan (betel leaf) is a tradition and a symbol of Indian hospitality which dates back to more than 5000 years,” getbengal reveal. “Offering a paan to guests after a sumptuous meal is part of Indian cordiality and affirms the age-old saying, ‘paan is the real shaan.’” ‘Shaan’ being the Bengali word for… apératif or digestive.

My sources weren’t clear on that, but several of my sources say the heat from the fire melts the sugar (raw, brown cane sugar). Have you ever had a ‘caramel’ burn, from hot sugar? And the vendors expect you to let them shove the ‘treat’ right into your mouth?

Fire Paan begins to sound like one of those ridiculous, often dangerous social media ‘challenges’ that have been proliferating online for the past couple of years.

“Chewing Paan (betel leaf) is a tradition and a symbol of Indian hospitality which dates back to more than 5000 years. Offering a paan to guests after a sumptuous meal is part of Indian cordiality and affirms the age-old saying, ‘paan is the real shaan.’

Mohammed Arifuddin of NNS Paan Mahal near Niloufer Hospital in Hyderabad told The Times of India in 2017. “says, “Fire Paan is good for health. We use herbal masala for fire. It is made at home. […] The paan does not harm consumers as the fire dies the moment it is put in the mouth. We have not has complains so far.” According to The Times, this is the same Mohammad Khaja Arifuddin who was charged in a major death certificate scam in 2018. So take his claims with however much salt you deem appropriate.

What are the health implications?

Aside from getting serious mouth burns, both from the molten sugar and the agents used to set the Fire Paan on fire (herbal masala, oil of cloves or chemical additives), doctors say the stuff is relatively benign. But much more research must be done before it can be certified ‘harmless’.

As for the positive health claims, legit doctors are not commenting, period.

Fire Paan is apparently an accepted novelty food on the streets of India, now. No moves have been made to limit or outlaw its manufacture or sale. You might be tempted to try it at an average price of only about (US)$0.65 per hit. But if you run across it somewhere, I’d recommend you just keep running…

2022-08-09
Previous Post: Street Food Discoveries: On the Streets Of India Part II
Next Post: A New Artificial Sweetener That’s Actually Good For You?