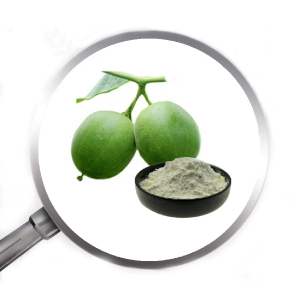 A New Artificial Sweetener That’s Actually Good For You?

Some would call it the Holy Grail of nutrition: A new artificial sweetener that’s naturally sourced, tastes like good old table sugar, and is actually beneficial to your gut microbes. But its discoverer cautions that much more research is indicated – in case it’s too good to be true… 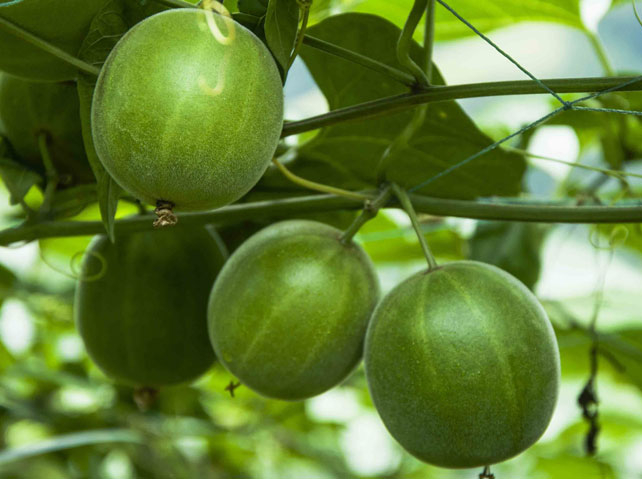 Monk Fruit ripening on the vine in Guangxi, China.

A heck of a moniker

The stuff has a heck of a moniker: galactooligosaccharide. It’s described as a mixture of lactose and mogroside V (the primary mogroside in luo han guo, or Monk Fruit), transformed into a third substance when treated with β-galactosidase enzymes. Early indications are that it has few if any negative side effects or drawbacks. Unlike ‘conventional’ artificial sweeteners which have been implicated in cancer and other ills.

Medchemexpress.com  claims, “Mogrosides exhibit antioxidant, antidiabetic and anticancer activities.” Medchem – as do other brands – sells mogrodside over the counter in pill form as a medicinal supplement, not as a sweetener. On the other hand, the stuff is marketed by other supplement makers as a sweetening liquid (administered with an eye-dropper) or powder at prices ranging from (US)$10. per kg / 2.2 lb. to around $50. at the high end of the retail range. But that’s pure Mogroside…

Mogrosides have been known for some time as natural, zero-calorie sweeteners – kind of in the same class as Stevia – but not massively commercialized. They come from plants such as the Monk Fruit. That’s a vine that occurs naturally in parts of Southeast Asia.

Herbalgram.org sums it up in a nutshell: “While it can be found growing in forests, on mountain slopes, riversides, and thickets in the Chinese provinces of Guangdong, Guangxi, Guizhou, Hunan, and Jiangxi, it is rare in the wild [but] has been cultivated in Guangxi for many years. […] For use as an ingredient in Traditional Chinese Medicine (TCM) formulations, the fruit is collected in autumn when it turns from pale green to deep green, and subsequently is dried in the open air or at low temperature for several days.”

The dried fruit is brewed into a tea to treat acute or chronic bronchitis, pertussis, pharyngitis, and tonsillitis. The juice of the ripe fruit has also been used for ages as  a thirst-quenching summer beverage much prized in those parts.

The trouble has been that plain mogroside is actually too sweet – up to 300 times sweeter than table sugar – and has to be cut with neutral fillers to be palatable. Alas, the fillers can cause problems of their own.

What the researchers did

Rather than adding fillers, a team led by Dr. F. Javier Moreno, with support from The American Chemical Society, wanted to see if they could create a natural-source sweetener from mogrosides that was the right strength, had the right flavour profile, and could be easily commercialized.

Moreno’s team experimented with a naturally-based process using enzymes to create a substance with only a small amount of mogroside.

An abstract of the study report reveals: “When they added β-galactosidase enzymes, the researchers obtained a mixture that contained mostly galactooligosaccharides and a small amount of modified mogrosides. A trained sensory panel reported that the new combination had a sweetness similar to that of sucrose (table sugar), suggesting it could be acceptable to consumers.”

But that wasn’t all: “In test tube experiments, the new sweetener increased the levels of multiple human gut microbes that are beneficial [plus] increases in bacteria-produced metabolites, such as acetate, propionate and butyrate, [which] could potentially have a prebiotic effect on the gut microbiome.

“The researchers say that the new sweetener holds promise in these initial analyses, and their next step is to more closely study the substance’s impact on human gut health.”

1. How easy is Monk Fruit to grow? Where can it grow? As a vine, would it take human pickers to harvest the fruit or could machines do the job?

2. How expensive would Moreno’s new sweetener be to mass manufacture? Stevia showed great promise initially, but even at the start it was noted the the stuff was expensive to grow and process, and could not compete (at least not without more development) with existing, less healthy sweeteners.

3. What it the new sweetener’s normal consistency? Can it be used in place of sugar or fructose in commercial food processing systems? Or is it, as the Medchem product suggests, more attuned to consumer use, in the manner of Sweet ‘N Low or Equal? Unless it’s adaptable to bulk processes, it may end up sidelined, so to speak, like Stevia.

4. Pure unmodified Mogroside is sold by supplement makers over the counter. But remember, it’s 300 times sweeter than sugar and, so, must be handled carefully to avoid disappointment or waste. I wonder if routinely diluting pure Mogroside in a commercial setting and getting a repeatable, accurate result is possible?

5. With all the beneficial traits identified by Moreno and his team, what might the inevitable drawbacks be?

As usual, in these situations, where a stunning breakthrough appears to have been made in the lab, we’ll have to wait and see how it pans out. And, as such, it will be some time – if ever – before ‘MogoSweet’ or anything like that arrives on store shelves…