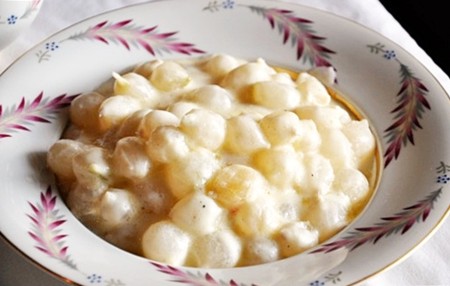 By: Maggie
In: Comfort Food, Festive Side Dishes

Here’s an oldie but a goodie! Creamed Onions were a cornerstone of festive family dinners in my Grandma’s day, but they’ve fallen out of favour in recent years – probably because they require a certain amount of time and fussing to make. Still, I think you’ll agree the results are worth the effort!

Here’s a bowlful of beautiful Creamed Onions, like Grandma used to make…
My grandma added a sprinkle of chopped mint on top. I sometimes use
a sprig of parsley or some chopped fresh Rosemary as a garnish.

Let’s start in the morning of the day we want to serve our Creamed Onions… Or even the day before, if you like. This is the hard part…

Place 1.5 lb. Pear onions, skins on, in a pot of cold water and bring it to a rolling boil. Then, drain the onions and dunk them into cold water (preferably, ice water). Now the skins should rub off easily, leaving glistening, firm little Pearl Onions. But they’re not fully cooked, yet. At this point, you can cover and store the onions in the fridge until about an hour before you want to serve them.

Next, make a Cream Sauce using 1/4 Cup melted Butter in which half a cup of all Purpose Flour has been cooked, on low heat, until the Butter has been absorbed and the mixture is uniform and creamy. This is the Roux, or thickening base, we’ve mentioned more than once before. Then, add 1/2 Cup of Heavy Cream and 3/4 Cup of Chicken Stock and stir frequently, on medium heat, until the whole mixture is thick and creamy – this could take 20 to 30 minutes.

Taste for Salt and Pepper and adjust the seasoning as needed. Add a good pinch of Nutmeg (but not too much) and then add the Pearl Onions. Simmer until the Onions are fork tender.

The melding of the Chicken, Onion and Nutmeg flavours will really impress your dinner guests!