Atlanta’s Mercedes Benz Stadium is challenging the credo that all food and drink items at got-you-in-their-clutches sports venues need to be priced ridiculously high – just to line the owners’ pockets. New Fan First pricing should be a model for all Stadiums, Arenas and like-venues! 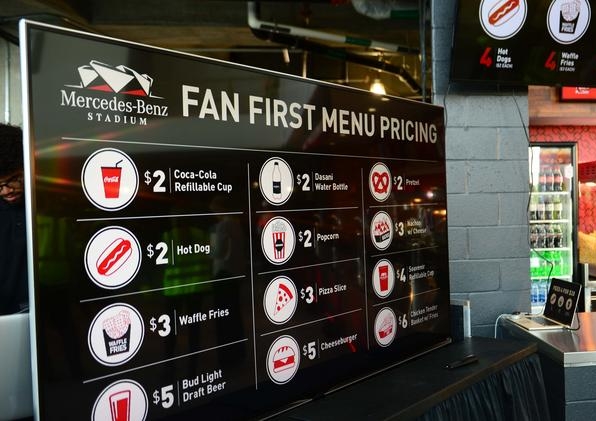 Atlanta Stadium’s low, low refreshment prices. Austin, TX, has also floored
food and drink prices. All other major league sports venues should
take note. In the long run, they can’t afford not to!

They call it Fan First pricing and it’s a wholly unexpected and shocking departure from the extortion that virtually all pro sports other stadiums and arenas practice on the fans who faithfully come out and spend ridiculously high prices for tickets to whatever event is on, on a given day. Outside food or beverages are strictly forbidden so you have to buy their crap at stratospheric prices. They’ll confiscate any ‘contraband’ they find and maybe even eject you from the premises. And, legally speaking, that’s their right, because it’s private property and they own it and they can make the rules.

Horror tales of Mothers denied the right to bring in formula for their infants and people who have special dietary needs or allergies being almost criminalized for trying to cater to their special needs aside, overpricing of sports venue food and drink is a moral and ethical wrong that’s been crying out to be righted for decades.

The Atlanta stadium has nothing on its menu that costs more than (US)$6.00 and the lowest priced items -Coca Col, Dasani Water, Popcorn, Pretzels and Hot dogs – are all just (US)$2.00. Compare that to (US)$7.00 soft drinks and (US)$15.00 Dogs at most other major league sports venues. The overall effect is, you can get out of a Falcons game spending less than (US)$20. on food where other venues would charge over (US)$100.00 for the same eats.

The economy has something to do with it… Stadium and team owners are realizing that people are fed up enough with insane ticket prices to events. Why encourage them, even more, to stay away by robbing them blind for refreshments?

Fans have less and less money, these days, to spend on ‘recreation’. Some poor folks are having trouble making their mortgage payments as interest rates creep up. (Told you to go for the fixed rate!) At the same time, greedy team and stadium owners are trying top squeeze more and more cash out of their fan base to help pay insane, skyrocketing player salaries.

The days of pro sports fan abuse are over. It’s time for owners, and players to take Atlanta’s example top heart – before they price themselves right out of business.