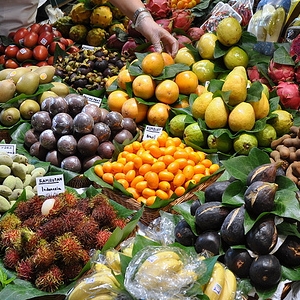 To top off our survey of Asian Fruits you will likely see if you visit an Asian grocery – but probably haven’t seen before – we present four delicacies rarely used in the West. Unless you tune into the FOOD Network every day without fail to see what weirdness awaits competitors in the Chopped mystery baskets… 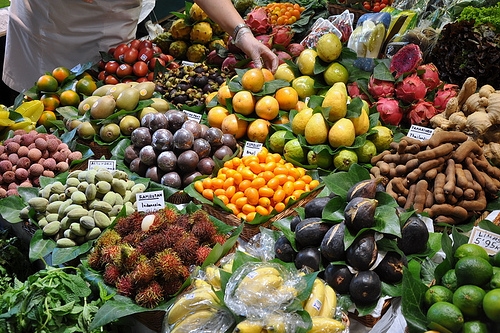 Okay, here we go! Prepare to sample some of the weirdest-looking exotic fruits you’ve ever encountered… 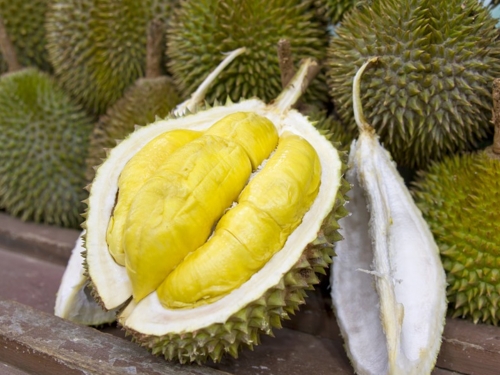 This is one of the monsters of the Asian Fruit tribe – it can grow up to a foot (30 cm) long and weigh up to 3 kg (7 lb.). Much of that is the spongy white outer skin and pith. You eat the soft yellow pulp. Be sure to remove the large oval seed which comes in every lobe of pulp.

Durian is named for the spiky protuberances on its skin and has been dubbed ‘The King of Fruits’ by its fans. Others have have different opinions, largely based on its distinctive aroma. The following Wikipedia quote tells the tale superbly:

Some people regard the durian as having a pleasantly sweet fragrance; others find the aroma overpowering and revolting. The smell evokes reactions from deep appreciation to intense disgust, and has been described variously as rotten onions, turpentine, and raw sewage. The persistence of its odour, which may linger for several days, has led to the fruit’s banishment from certain hotels and public transportation in Southeast Asia.

While Durian’s bouquet may be subject to debate, it’s flavor is decidedly sweet, which is why we find it in many Southeast Asian Desserts, Beverages and sweet-sour Sauces. 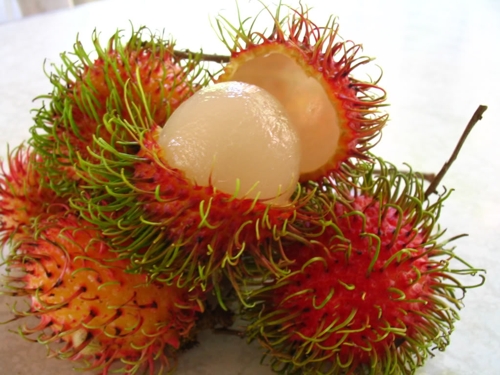 Rambutan is a small, oval tree fruit distinguished by the hair-like spikes covering its skin.It is native to Maylasia and Indonesia but is grown in tropical climates around the world. Inside he bright red or yellow skin is a translucent, white pulp which surrounds a large seed. The pulp is sweet and firm not unlike its cousin, the Lychee. Use it in any dishes where Northern Asian cooks might choose the Lychee. 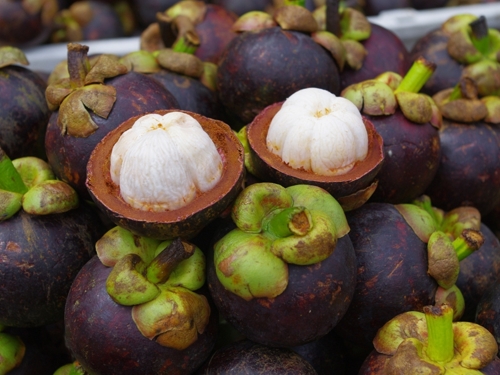 Typically baseball-sized, Mangosteens are usually purple-skinned and feature a thick layer of pith surrounding a lobed core. Each lobe contains an almond-shaped seed. If not for the extreme difference in size and the absence of external spikes, you might think it was a tiny Durian. Oh, and the aroma is decidedly more wholesome. Mangosteen’s devotées insist they’d rather have a bowl full of its luscious segments – with the large seeds removed, of course – than a Chocolate Sundae or. It’s flavour and fragrance are generally considered subtle and delicate, with the familiar sweet underpinning that all of the Fruits in this post share. 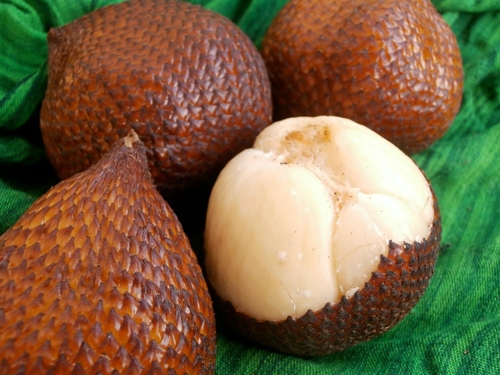 Also known widely, in its home range of Eastern-most Southeast Asia, as Salak, the Snake Fruit is an egg-sized oval fruit with one pointed end – like a snake’s head – and skin covered by scales that also resemble a snake’s. Under the thin skin lie several lobes of milky-white pulp, Like other lobed Asian Fruits, each section of the pulp may contain a large seed. The Apple-like pulp has a sweet-sour flavour, not unlike an Apple. Or, perhaps a Pineapple. Like the Rambutan It’s a natural for Desserts, Salads and Beverages

…We bid a fond farewell to the magical lands of the Orient and take away with us myriad memories of exotic new Fruits that will enhance our dining experiences in the days, months and years to come!