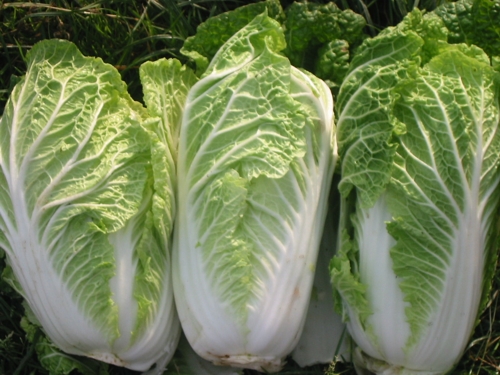 We’ve only just scratched the surface of the Real Asian Ingredient realm… The more you look, the more you discover there is to see! And I’m happy to report that my e-mail box has been bursting with suggestions for further ingredient exposées. Today, we’ll tackle just one ingredient, but it’s a big one…

This oval-shaped monster can weigh up to 2 kg / 5 lb. and is sometimes mistaken for an exotic type of lettuce due to its overt similarities to Romaine Hearts, Endive and Escarole. Its structure is less dense than other cabbage varieties and when shredded, you might thing you’re looking at Savoy. Indeed, many Western cooks default to Savoy when real Asian Cabbage is not available.

But the issue of availability has become less acute in recent years, as more and more Asian produce has become available in mainstream supermarkets and Asian specialty grocery stores have proliferated in response to growing demand from growing Asian communities, particularly in the North American suburbs. And that’s a good thing for all of us!

What’s in a name?

…Shakespeare asked: ‘A rose, by any other name, would smell as sweet!’ And a crinkly cabbage by any name would taste pretty much the same. But there has been a bit of a naming kerfuffle over the unbiquitous Asian Cabbage since it came to north America.

‘Chinese Cabbage’ is, properly, ‘Wom Bok’. And that’s actually Brassica Rapa Pekinensis, one of two major sub-varieties of Rappa widely enjoyed across Asia. And when this Asian staple came to North America, it was sought after by the growing Chinese-American community in California. When farmers in the state’s Central Valley started producing it in volume, it became known for the City where it was shipped from – Napa. Alas for lovers of language oddities, there is no official variant of Asian Cabbage named Rappa Napa. But I, for one, think there should be.

While used in myriad dishes in almost all Asian cuisines, Rappa Pekinensis is perhaps best know as the main ingredient in Korean’s national dish, Kimchi. If you don’t already know of Kimchi, let’s just say it’s a fermented Cabbage Pickle with lots of Salt and Red Chillies. 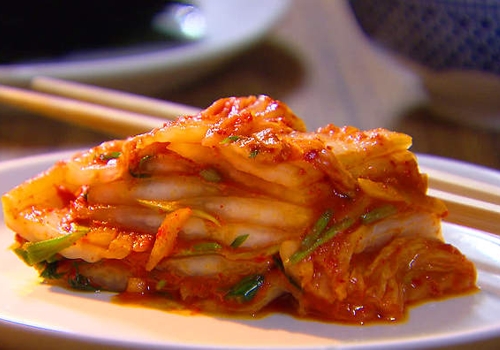 Classic Kimchi: Fermented Chinese Cabbage. In Korea, they eat it on,
in and with just about everything…

It’s commonly fermented for a few weeks at room temperature, then sealed in earthenware pots and buried in the ground, to keep it cool in summer and to keep it from freezing in winter. Koreans absolutely love stuff and will eat it on, in or with just about anything. Kind of like some Western diners and Ketchup.

It’s also interesting to note that, while Bean Sprouts have become a staple of North American ‘Chinese’ cuisine, they were only adopted by Asian immigrants who came to America to build the Transcontinental Railroad in the 19th century as a substitute for Cabbage – before the folks in and around Napa started growing Rappa.

Cabbage Rolls are supposed to have actual Cabbage in them! They, too, by the way, are North American creations based on Won Ton wrappers stuffed with shredded veggies. The whole deep-fried angle? Not really Asian. ‘back home’ they would boil them until they float and then pan fry them in a little oil for a couple of minutes, until they get a nice golden crisp on at least one side.

What we Westerners know as Chow Mein and Chop Suey originated as vegetable dishes based on shredded Cabbage. Really. And that’s just the start.

Here’s to Chinese Cabbage! So versatile, yet so simple… And a cornerstone Real Asian Ingredient!