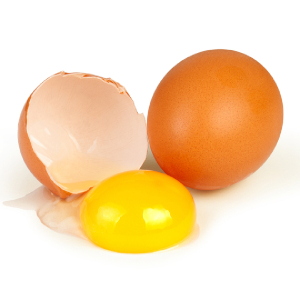 Rewind to yesterday’s post, when I mentioned that the orphaned Egg Yolks from all those Egg White recipes would be used forthwith in a Dessert post today. Now, fast forward back to today, as we learn how to whip up (literally) a creamy, delicious ‘almost instant’ Custard from just a few simple ingredients… 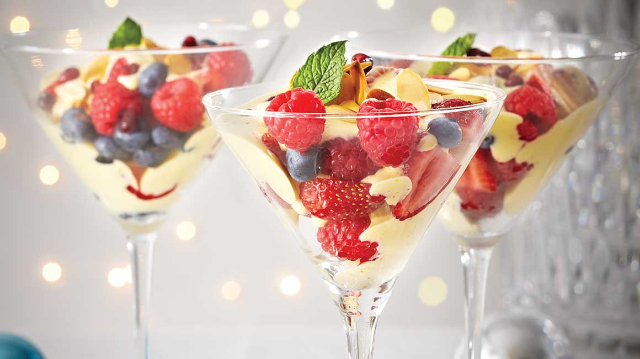 Almond Sabayon with Fresh Fruit: Just one of thousands
of combinations awaiting your consideration…

I’m always amazed when I stop to consider the wide variety of extraordinary, yet simple dishes that can be made from nothing more than an Egg and a few additional ingredients most of us have in our pantries.Yesterday we toured the realm of the Egg White. Today, let’s have a look at what we can do with the Egg Yolks we have left over.

I clearly remember the day, when I was at culinary school, that I was responsible for Desserts on the luncheon menu at the school’s white-tablecloth restaurant, and my Crème Caramels (the first time I’d attempted to make them!) were running late. I hadn’t reckoned on them needing time to set up in the fridge before un-moulding them. I was having fits, because everyone on the regular restaurant staff had been telling me how popular the Crème Caramel was with the resto’s most faithful patrons – mainly college staff and guests they wanted to impress.

But after plunging my three dozen still warm and liquid CCs in to then walk into freezer in a desperate attempt to peed them up, my Chef instructor just said, “Well. We’ll have to come up with something just as classy and indulgent as a stand-in. But it will have to be something ‘instant’ as well…” I was skeptical, but he already had a plan.

Our culinary class was co-ed, and the women often had to dodge outbursts of frustration (or panic) from the guys expressed in language some of us would have preferred the men had left in the locker room. But, as our first-semester lab instructor had warned, a restaurant or hotel kitchen could be a rough environment right up to the Chef, who might be the kind who might toss off his own spicy comments or toss substandard food across the floor depending on his own state of mind at any given moment. So the women decided, early on among ourselves, to just ignore bad behaviour from the men and press on. The way you would with a misbehaving child who was just looking for attention. The worst thing you could do was was give it to them.

“This one is nearly foolproof, fast and absolutely entrancing,” he chuckled. “My boss, the first place I worked after I got out of school, used to say it would really make the panties drop!” The guys in the group guffawed, and girls turned silently pink. I, alone, called him out as a dirty old man. He just smiled.

* For best results, make Sabayon in larger batches (of at least 6 servings at a time)

Set up a double boiler with the mixing bowl sitting over the simmering Water. Tip the bowl a little toward the same side as your dominant hand – the one in which you’ll hold your whisk.

Place the Yolks Sugar and Spirits into the bowl, and whisk briskly. The idea is to incorporate air into the Yolks and cook them, gently, at the same time. The trick – if there can truly be said to be one – is to just cook the Yolks enough to create a smooth, creamy Custard and not cook them until they curdle or – God forbid! – solidify. You can keep whisking as long as you want to, within reason. Ideally you’ll keep going just until you can dip a finger into the Custard and not feel any undissolved Sugar granules. The Yolks should at least double or triple in volume, depending on how hard you whisk, but don’t push it beyond the thick, custardy stage.

Transfer the Custard to those fancy single-serving glasses you’ve set aside and place in the fridge to cook and consolidate before serving. Or, you can serve the Sabayon immediately, warm, as a thick liquid, if you want. This is the method to follow if you intend to use the Custard as a sauce for some other dessert.

After the Custard does set, you can add a garnish of your choice and it won’t sink to the bottom of the glass. As for that garnish: you can add pretty much anything you want as long as it complements the flavour Spirits you used in the Custard.

About the Spirits: My instructor swears by Baily’s Irish Creme Liqueur. I prefer Triple Sec or Grand Marnier. Marsala or similar Fortified Wine is traditional.

An off-the-cuff Sabayon has saved a fancy dinner for me more than once, when the planned Dessert has not worked out.Just keep your wits about you and make like you planned it that way. I’ve successfully made Sabayon over a portable burner at the table (like Cherries Jubilees)!

And here’s another Chef’s secret: some of you will no doubt have noticed the similarity between Sabayon and Italian Zabaglione. They’re close cousins, made the same way, but with different traditional ingedients. To make a classic Zabaglione, add some Sweet White Wine to the Sabayon recipe as well as some Marsala Wine. Zabaglione is classically served warm, as a creamy, saucy dessert. The extra Wine helps keep it smooth and creamy.