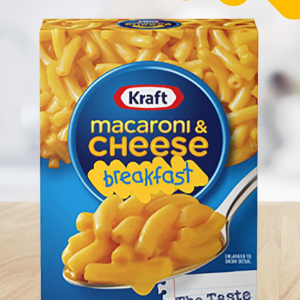 Yes, really. Like the old Egg Producers’ slogan, “They’re not just for breakfast anymore!”, this is kind of the inverse: “KD: Not just for Lunch and Dinner anymore!” But I was totally taken aback when I first heard that some folks have been feeding Kraft Mac ‘n Cheese (also ‘Kraft Dinner’, or just ‘KD’ for short) to their kids for breakfast… 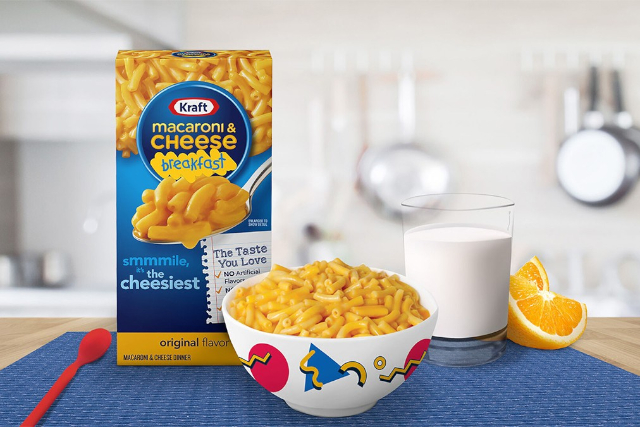 I guess it was inevitable. I am of the generation that first made that infamous, all-purpose convenience meal, Kraft Mac ‘n Cheese (also known as ‘Kraft Dinner’, or just ‘KD’ for short) a college dorm room staple in the 1970s. How much easier could a hot meal be? All you needed to do was boil the Macaroni, add Butter and Milk and stir for a few minutes. And it was literally the cheapest meal you could make at less than a dollar a box. KD actually became an icon of the classic ‘starving college student’ lifestyle.

But now, in the Summer of COVID-19, some bored folks have begun to play with the idea of KD as the next big breakfast ‘thing’. And Kraft is playing along with a new promotion.

A recent Kraft news release raves: “As a brand loved by the entire family, we’ve learned Kraft Mac & Cheese isn’t just for dinner,” says Kelsey Cooperstein of Kraft Heinz, “A Kraft Mac & Cheese breakfast is a win-win for families at a time when they need all the wins they can get.”

It all came to light when a recent survey by Kraft, inventor and still proprietor of classic Mac ‘n Cheese in a box, revealed that more than half of those asked admitted they had fed their kids the quick, easy, never-unwelcome dish for breakfast at least once during the COVID-19 lock down. And a  Tastewise analysis of attitudes and trends surrounding food on the Internet found that online mentions of Mac ‘n Cheese for breakfast or brunch had increased by 50 percent over the past 12 months.

What about the restaurant sector?

Without the pressure and business model mauling-pressures of the pandemic, the resto sector might have responded more enthusiastically to this alleged trend by now, but most front line foodservice operations are struggling just to survive. So it’s rather remarkable that any are touting new Mac ‘n Cheese Breakfast menu items. Nevertheless, one California breakfast resto chain, Breakfast Republic, now features a Breakfast Mac ‘n Cheese Skillet menu item consisting of a bed of Mac ‘n Cheese topped with Eggs and Bacon. And it appears that a staunch minority of similar restos are cautiously climbing onto the bandwagon.

The home front is the new frontier

So, what kind of stuff are people cooking up?

By far, it appears that the most popular version of Breakfast Mac ‘n Cheese is some variation of classic Hash: a bed of Mac ‘n Cheese with various Diced Veggies and Meats mixed in or spooned on top. Many such recipes have specified topping the dish with a Fried Egg.

Another whole class of Breakfast Mac ‘n Cheese menu items which emerges quickly when you start googling ‘breakfast mac and cheese’, consists of diverse versions of the classic Bread-based Breakfast Bake. You just substitute Mac and Cheese for the cubed Bread and Custard base, top with Bread Crumbs (and Eggs, if you like) and bake until bubbly.

And here’s one for Mac ‘n Cheese Pancakes…

One thing you’ll notice is, many of these Mac and Cheese Breakfast applications are great for using up leftover Mac and Cheese, whether the Kraft Instant version or not.

But there are caveats…

“I can tell you first hand that parents are stressed and meal time is certainly adding to that stress,” online Dietician Frances Largeman-Roth told TODAY.com. “Mac and Cheese is something that most kids, mine included, generally like and eat happily. Mac and cheese provides carbs for energy and some protein and fat, but I wouldn’t call it a complete breakfast.”

Not by a long shot. It’s got a lot of Sodium in it (expecially in the Cheese Sauce Mix) and is missing a lot of stuff, like Fruits and Veggies and Protein that you need to make a complete, nutritious meal. Nevertheless, Largeman-Roth admits Mac and Cheese could be ‘part of a complete breakfast’. Occasionally.