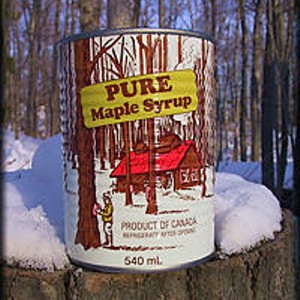 Finally! After decades of discord and confusion in the North American maple Syrup industry, Canada and the U.S. have agreed to standardize Maple Syrup grading systems across all major production areas. Maybe this will help control Maple syrup counterfeiting and fraud!

I’ve talked about the muddled Maple Syrup grading systems in North America, which vary widely from province to province and state to state. Some rely on colour variations and some on nebulous flavour standards.

Now,after a decade of earnest discussions between Canadian and U.S. officials, a unified standard has been agreed upon.

The new system will simplify some aspects of Maple Syrup grading and labeling:

All retail Maple Syrup will be labelled ‘Grade A Maple Syrup’, except for some types which will be called ‘Processing grade’, which may contain ‘minimal quality defects’, to be used in the food processing industry as opposed to being sold for topping pancakes or waffles at home and in restaurants.

Purity standards will also be clearly defined and enforced. Like standards for many European products, such as French and Italian Wines and Cheeses, calling any blend of real syrup with sugar water or other dilutants ‘Maple Syrup’ will constitute fraud.

In line with the standards Canadians are used to, the new regulations will grade Maple Syrup  by colour: from ‘Golden’ at the lightest, to ‘Dark’ at the heaviest. As we all know, the flavour of Maple Syrup becomes stronger as the colour becomes darker. The price also goes up. That’s all because you get darker syrup by boiling it longer and concentrating it more.

And have a stack of pancakes or waffles this weekend for breakfast!