When I awoke this morning and saw it was still pitch dark outside, I had a hunch this was going to be a tedious, depressing, grump-inducing day. Thus far, after getting Mom up, and performing my own ablutions, I can confirm it’s turning out every bit as gloomy as I thought it would… 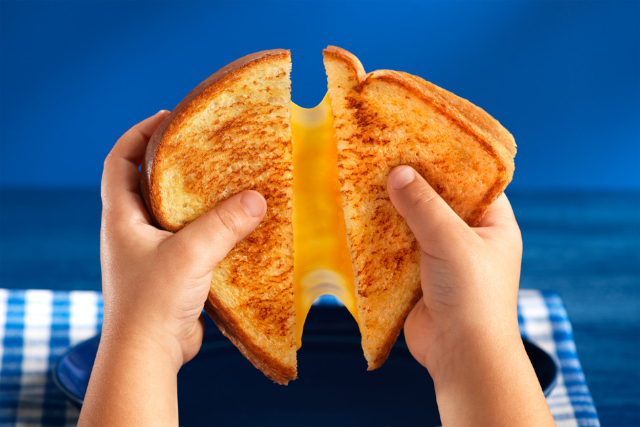 Classic Grilled Cheese: Ready in 10 minutes or less. No Muss, no fuss…

For a start, it was not only dark, but very cold. Or it seemed so, until I considered that it’s the middle of September already, and Fall is righteously huffing its frosty breath all over the windows. According to the official weather forecast, it will be cloudy, clammy and drizzly all day.

My back has been giving me hell for the past week since the onset of my last episode of chronic sciatica. Yes, I’m doing the exercises and wearing my brace, but it takes longer to recover from something like that the older you get. Ditto, my left knee, which I twisted badly a couple of weeks back, trying to turn while I lifted heavy box. That was just stupid.

On the up side, Mom and I have been staying home while Erin makes any necessary trips out into the world, and none of us (we think) has had COVID-19. But staying home gets stale really quickly, no matter how much Lock Down Cooking Fun you can concoct, and cabin fever has predictably each of us getting on the others’ nerves, so we’re spending more and more time to ourselves, reading, playing Solitaire and watching what we want on  separate TVs.

And most of our conversation now consists of terse, mildly sarcastic one-liners. For instance:

“Then why do all the neighbours have their garbage cans out at the street?”

What do you feed a mob of budding sociopaths like us in a bid to cheer things up?

Some of my personal ‘prescriptions’

Using as a base Chicken Stock of your own, or from a supermarket box, get as much as you’ll need for the number of servings as you’ll need simmering cheerily on the stove top.

Toss in a handful our two of Dry Pasta of your choice and allow to par-cook before proceeding.

Add a handful or two of diced frozen Mixed Veg (Onions, Carrots, Peas, Sweet Corn Kernels and/or whatever you like) and allow the Soup mixture to come back up to a spirited simmer.

Then add leftover boneless Chicken Meat (cubed, shredded or whatever you have; Deli-sliced Chicken or Turkey ‘Roast’ will also be just fine) and stir. I’ve even switched tracks in mid journey at this point and tossed in leftover Cocktail Shrimp or some diced Fake Crab Meat. They all work.

Simmer for another few minutes, tasting for Salt and Pepper, and add a few grates of Fresh Nutmeg.

Get a jump on the usual procedure by Toasting (in the toaster) as many pairs of Bread Slices as it will take to make as Sandwiches as you want.

When the Toast Slices are done, Butter both sides of each slice lightly.

Place slices of Real Cheese (not ‘American’, or ‘Process’ Cheese) between each pair of slices.

Add Crispy Bacon, Thinly Sliced Mushrooms, Slivered Onions, or whatever you fancy and/or have on hand.

Finally, re-heat the Sandwiches in the microwave, just until the Cheese melts and starts to bubble.

Add a couple of tablespoons of Miso (more or less to taste) to riotously simmering Water, or just heat up some Beef Stock.

Toss in some Dry Asian Noodles (or Wontons) of your choice and stir until the liquid comes back up to the simmer.

Toss in a handful of Green Peas and Corn Kernels (frozen, leftover; whatever).

Add some medium-diced Onions, Sweet Peppers or whatever you have on hand that seems to fit the blend.

When the Noodles are just al denté, serve in deep, rimless bowls that will allow for sipping the Soup and/or slurping the Noodles.

I’ll bet you know at least one or two other recipes that will soothe your mood and satisfy your culinary cravings as much or more than a cup of Tea or Coffee or Cocoa, and are just as fast to make.

And do remember that making enough of whatever you choose to make to also thaw the souls of those around you in your lock-down prison will make you a hero, of sorts as well.