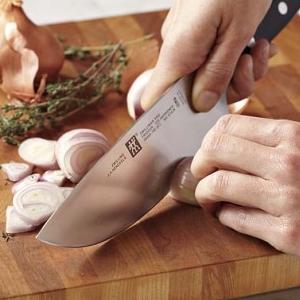 Be A Real Cut-Up With The Right Knives

I’m sure you’ve seen those ads for kitchen ware that strongly suggest that you need a whole block full of knives to ‘cook like a pro’. Nonsense! They just want to sell knives. And a lot of those they sell at most such stores are really not that great. Today, I’m going to share some insider tips… 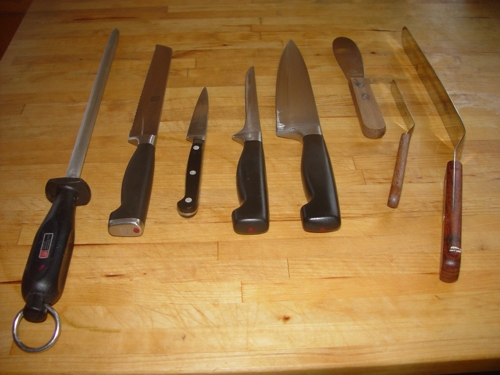 From Right to left: Large Offset Palette Knife, Small Palette Knife, Spreader,
8 in. Chef’s Knife, 5 in. Boning Knife, 2.5 in. paring knife, 8 in. Serrated Slicer.
And, Far left, the honing steel you’ll need to keep them all sharp and ready for action!

One of the very first things I learned on Day 1 of Culinary School is that you really need only three or four good quality cooking knives to cut up like a Pro.

Those big ‘knife block’ sets may have every knife you’d ever imagine, but most of the smaller ones are superfluous. The Steak Knives, doubly so. Here are the knives you need to cook anything like a pro…

Get a good quality Chef’s Knife 8 or 9 in. long. Try several to see how they feel in your hand. The ideal knife for you will feel balanced at the point where the blade meets the handle and have a comfortable transition from blade to handle. Because that’s where you’ll be holding it. You’ll use your trusty Chef’s Knife for 80 per cent of your cooking chores. It will become like a pro golfer’s favourite putter or a pro carpenter’s trusty hammer. You might even find yourself packing it to take with you when visiting friends or family where you might be cooking…

These come in sizes from 5 in. to 7 in, depending on the maker, a longer one is a good idea if you’re planning to break down primal cuts of meat like whole bone-in Beef Loin or you want to save money by buying whole Chickens when they’re on sale, breaking them down into the usual 6 or 8 pieces and freezing them. We generally cut up 6 Chix at a time and that lasts us at least until the next sale! There’s also the question of flexibility. If you dress a lot of fish, you’ll probably want a Boning Knife with a flexible blade. Flexibility is a great asset when filleting and skinning fish!

You probably know this one as a Bread Knife. Or you may have used a heavier version to cut through blocks of frozen food or other tough stuff. Get a good, stout one.Those examples sold as ‘Bread Knives’ are usually stamped out of very thin sheet steel, not forged, and are too flexible for other applications you may need a Serrated Sliver for. The longer the blade, the better. A 10 in. blade is ideal, in my opinion.

One of my most beloved blades, which I acquired as an inheritance from my dear, departed Dad, is a 3.5 in. Paring Knife. This little guy is great for hulling Tomatoes and apples and is the one I always reach for when finely Dicing Garlic. If you want to make nice even, consistent cuts on picky things like Olives for a nice presentation, the Paring Knife should be your choice. You’ll find lots of other applications where a little blade like this is much more convenient than your big, bulky Chef’s Knife.

After that, it depends on you – and what you cook…

I’ll admit that I’ve amassed quite a collection of knives since I became a professional Cook. here are some of them..

A Figuring Knife is has a very small, thin curved blade and is intended especially for sculpting Veggies and other decorative work. If you want to do Radish Roses or carve Watermelons like Fabergé Eggs, you’ll definitely want to blow a few bucks on a Figuring Knife. They aren’t expensive and they can be great fun!

An Apple Corer is not really a knife, but the one I have has a cylindrical blade on a very knife-like handle. Just push and turn along the axis of the core. Works like a charm. You can also use it to core-out Pears, Cucumbers and other foods. Makes a nice presentation when you’re showcasing something like Baked Apples or Stuffed Poached Pears.

A Spreading Knife is just that; a knife for spreading stuff on sandwiches and other foods. It has a short, wide blade with a smooth, dull edge on one side and a serrated edge on the other. From slathering Mayo on a Sub or crowning a bagel with Cream Cheese, this one will save you time, trouble and mess.

A Palette Knife looks just like the one they sell for artists who want to do Impasto work, hence the name. In fact, it is, essentially, the same thing, at least in small sizes. Cooks usually prefer larger sized ones, for Baking projects. If you’ve never used one to frost a Cake, you’ve been missing a out! Large Offset Palette Knives are also just the ticket for flipping Crèpes and Omelettes. Like Spreaders and Figuring Knives, these guys cost only a few bucks and you’ll love how easy they make what heretofore have been niggly, tricky moves.

But knives are just the beginning…

There are thousands of kitchen gadgets available and some of them are actually useful! We’ll look at some of the best – and worst – in a future post…