Arby's pioneering initiative to offer Venison Steak Sandwiches at selected locations in the Northeast and the Midwest? It was supposed to be a test market for a potential future menu item in ap" />
Skip to content 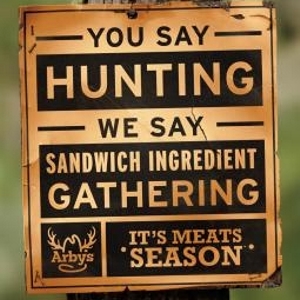 Remember when we told you about Arby’s pioneering initiative to offer Venison Steak Sandwiches at selected locations in the Northeast and the Midwest? It was supposed to be a test market for a potential future menu item in appropriate (deer hunting) regions. But, now, it looks like a cynical stunt…

At the time, I wondered if Arby’s would be able to get enough Venison to meet the expected demand, even for a pilot project, let alone a regular menu offering. I also wondered how they were going to handle the finicky aspects of cooking the ultra-lean meat consistently. But that doesn’t seem to be an issue. Now, it looks as though the Venison Steak offering was never meant to be a thoroughgoing test market exercise, let alone the prelude to a regular, ongoing menu offering.

I was also skeptical about the (US)$5 price for the Venison Burger, feeling in my bones that they couldn’t sell the sandwich for that price on an ongoing basis.

Why the sudden cynicism?

Because the Nation’s Restaurant News reports this week that Arby’s ‘limited time offering’ sold out in 15 minutes at some of the 17 test locations and lasted a maximum of 90 minutes at the most heavily-stocked location. To me, that smells like a publicity stunt, not a market test.

Well, it all makes sense, now. 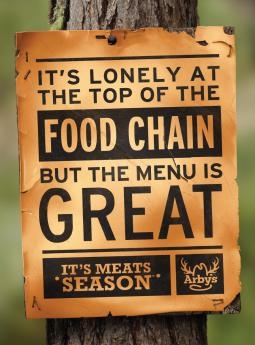 Because Arby’s has let the gag out of the bag with the launch of a new TV ad campaign linked to the Venison Burger stunt. It wasn’t about introducing Venison Burgers at all. It was about priming the public for a new ‘hunting’ themed promotional push for the Deer Hunting season. The video, above, is a prime example of the stuff they’re putting out in support of their ‘It’s Meats Season’ campaign..

Now, I love Arby’s food and I was really enthused about the Venison Sandwich introduction. But, now, it’s a case of, ‘the bigger they come, the harder they fall’. ‘They’ being my perceptions and expectations of Arby’s. They’ve fallen through the floor of skepticism into the dark, dank basement of cynicism. Does anybody else out there feel cheated? Disillusioned? Just plain sour, over the way Arby’s misled millions of its fans? I’d be shocked, on top of it all, if other once-worthy Fast Food giants had not already succumbed to the lure of cheap tricks to elevate themselves above the snarling competition.

I guess I just have to accept that Arby’s is, at its core, no different then any other mega company, in thrall to it’s greedy shareholders, always looking for ways to manipulate the consumer for its own benefit. I was just as angry and hurt when Subway turned out to be like that, cutting way down on the substance of their sandwiches, slicing their meats and cheese paper-thin, and expecting us to go along with the deception.