They started their big menu expansion several weeks ago with the launch of a new Pork Belly Sandwich. Pork lovers are eating it up. Now, they’re test marketing a Venison Steak Sandwich to see if the Deer Hunters in the Northeast and Midwest will bite… It’s a brave, noble initiative! 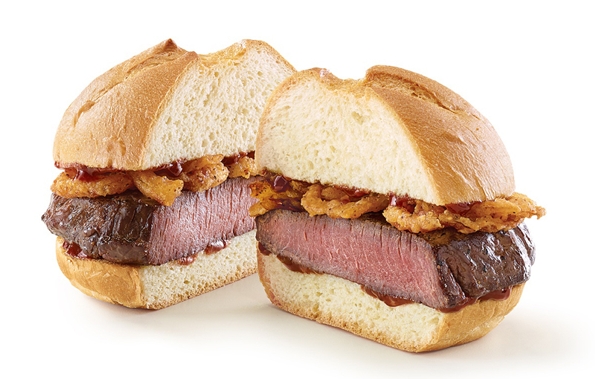 The new Arby’s Venison Steak Sandwich. With crispy Onion Rings and a nice Juniper Berry
BBQ sauce. The meat is marinated in Garlic, Salt and Pepper and slow cooked
for three hours. I like the custom bun, too. Looks like Sourdough! Yum!

The Venison Steak Sandwich looks good in its official portrait, above, but we all know that the official pix of fast food the restaurants put out generally reflect the wishful thinking of the makers, not the reality they put in your hands, at the store. Even so, I like the idea that the folks who have always put their meat front and centre are expanding their selection of trademark meats, rather than just tossing out new takes on their flagship Roast Beef.

First, will they be able to get enough Venison to meet the demand I predict they’ll generate? How many Deer farms are there in New England and the Midwest? Maybe they have a secret plan to ramp up production at existing specialty ranches. They sure as shootin’ (sorry for the pun) aren’t going to rely on hunting in the wilds to furnish a reliable supply. We’ll see.

Second, Venison is a very lean, finicky meat; hard to cook properly. There’s only a narrow window between underdone and shoe leather. Will Arby’s lard or bard its Venison with extra fast prior to cooking? Will they follow up the original with a bacon-wrapped version? I’d buy that in a blink!

As I said off the top…

I think this is a great, bold and noble culinary initiative by Arby’s. I’m salivating in anticipation of the Canada launch of Venison Steak Sandwiches. And I’ll be keeping a weather eye out for creative responses from other Sandwich/Burger chains! As diners, we all win!