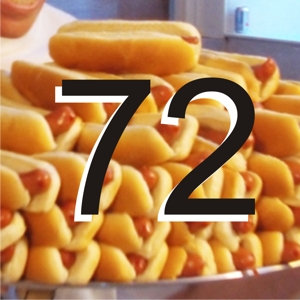 And The Winners Are…

As you know, the annual Fourth of July Nathan’s Famous Hot Dog Eating Contest went off as planned yesterday… Defending Champs Joey Chestnut and Miki Sudo faced full panels of male and female challengers from regional competitions all across the U.S. And the winners were… 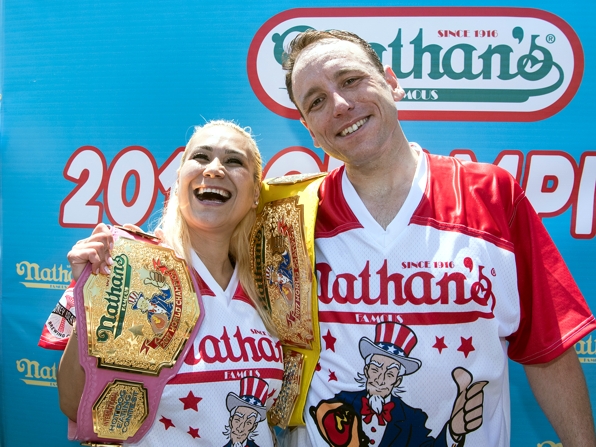 Joey and Miki – Repeat winners of the Nathan’s Famous Hot Dog Eating Contest.
But how do they keep those lean, mean figures?

Joey and Miki! Yes, they both successfully defended their titles… As the official contest website reports:

They came. They ate. They defended their titles in record fashion… Fending off fierce competition by rising star Carmen Cincotti, Joey ate his way to a Coney Island record of 72 hot dogs. Now with 10 Nathan’s wins under his Mustard Belt, there’s no doubt that Joey Chestnut is the greatest eater of all time. On the women’s side, Miki Sudo topped Michelle Lesco and Sonya Thomas to snag her fourth Nathan’s title in a row and set a new personal best of 41 hot dogs.

But what happens after?

How on earth do those competitive eaters manage to stay so slim and svelte? Those in the know say it’s simple: They throw it all up, quietly, in private, out of sight of the fans, soon after each session. I found this ‘insider’ report on Quora.com:

“As the friend of a girl that dates one of the top three finishers and having attended the Nathan’s private after party every year I can tell you that they all puke it up 100% of the time. Every contest, no matter the food. The euphemism is “vacating.”

I have come to know way more about this “sport” than I truly ever cared to—the training involves drinking gallons of water regularly to expand the stomach but with the immediate need to puke it back up before suffering from water poisoning. The eater my friend dates has been in the hospital because he was “training” but didn’t puke it back up in time. Water poisoning is apparently pretty serious. I Wikipedia’ed it.”

So did we. Wikipedia says:

Water intoxication, also known as water poisoning or hyperhydration, is a potentially fatal disturbance in brain functions that results when the normal balance of electrolytes in the body is pushed outside safe limits by overhydration (excessive water intake)…

Water, just like any other substance, can be considered a poison when over-consumed in a specific period of time. Water intoxication mostly occurs when water is being consumed in a high quantity without adequate electrolyte intake.

The more deeply you look into the ‘sport’ of competitive eating, the darker it gets!