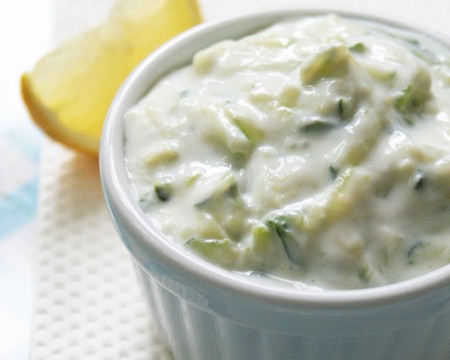 A comment on ‘The Dark Side of Greek Yoghurt’?

A post on ‘The Dark Side of Greek Yoghurt’… Hahahahahaha! Wait… You’re not kidding? No, and it’s not the Yoghurt, itself, that’s the problem. Apparently, there’s a byproduct from its production that is posing disposal problems for manufacturers. And ecology advocates are speaking out.

Tzatziki Sauce – perhaps the best-known and most celebrated use of
Greek Style Yoghurt. See SeriousEats.com for over three dozen
more classic recipes!

The problem is that Greek Yoghurt is much thicker and creamier than regular Yoghurt. There’s really no other major difference between the two types. And its the extra liquid – whey – that is drained off from the Greek Style product that is overloading the system. With regular yoghurt, there’s a relatively small amount of whey to deal with. But with Greek Style, there’s two or three times more.

According to a recent post at Modern Farmer.com reveals, manufacturers have traditionally gotten rid of the nutrient-rich liquid by selling or giving it to farmers to feed to their cows and hogs, but livestock can only eat just so much of it. Too much of a good thing will make anyone, or anything, sick.farmers can’t handle the flood.

Whey can also be spread on cropland as fertilizer, but there’s a limit to how much whey you can put on the spoil before runoff becomes a problem. And you can’t just dump it in the creek. It’s highly acidic and can kill fish and other water life.

But these efforts are not keeping up with the flood of whey coming out of the Greek Style Yoghurt industry.

Wanna be the next big millionaire inventor? Come up with the ultimate use for whey and patent it before the mind pirates scoop you!

2014-03-17
Previous Post: Yes! The ‘Five Second’ Rule is real after all!
Next Post: Doctors finally agree: Butter really is Better!