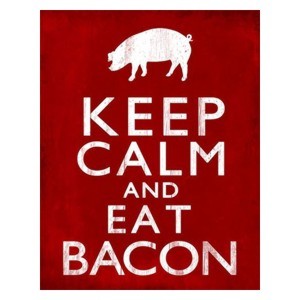 Yes! You CAN make your own Ham and Bacon!

Okay… We’ve recently heard that Pork prices will continue to soar this coming year. That means even higher prices for smoked and cured Pork products. So, how’s the average red-blooded Canadian going to get their Bacon fix without breaking the bank, eh? The good old DIY way – that’s how! 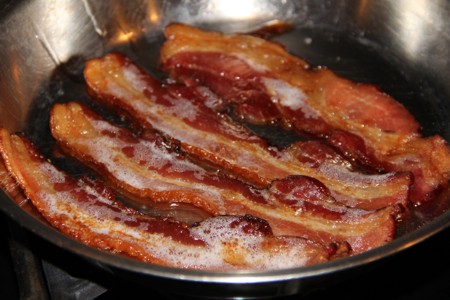 Yes! You can make your own Ham and Bacon. And you can (potentially) save a significant amount of cash doing it.

Ham is nothing more than the shoulder or leg of the pig marinated, or ‘cured’, in a salt solution for anywhere from a couple of days to a couple of weeks before cooking. Bacon is the belly of the pig treated in the same manner. Peameal Bacon – what American’s call ‘Canadian Bacon’ – is the Pork loin cured in the same way as a Ham or a slab of Bacon, except that it’s rolled in a coating of coarse pea meal or, more commonly, corn meal.. The curing makes the meat turn the familiar pink of ham as well as preserving it and flavouring it.

One thing you’ll need to have on hand, that you might not have already around the house, is a large stock pot or a food-grade white plastic pail with a tight fitting lid.

Most butcher shops either have Pork shoulders and legs on hand or can get them in for you in a couple of days on order. I got a nice shoulder – about 7 lb. (3 kg) – at the supermarket yesterday. It was a ‘Manager’s Special’ and the price was certainly right: under $9., or about $1.30 per pound. I’m making it into Ham that would cost about four or five times that per pound if I just went out and bought a factory-cured Ham at the store.

And I get to put my own flavour stamp on it!

Your basic Pork Cure consists of 1 gallon (4 L) of hot water, 1 cup of Coarse Salt, 1 cup of Brown Sugar and 1/2 cup of Curing Salt. Curing Salt can be bought at most butcher shops and Italian grocery stores. (Italian cooks like to make their own Pancetta and Salami. but that’s a whole other lesson for a Future day!)

You can add Herbs and Spices to suit your personal tastes. Common additions include Black Peppercorns, Bay Leaves, Nutmeg, Whole Cloves, Star Anise, Thyme, Rosemary, Dried Juniper Berries and, of course, peeled, chopped Garlic… Other interesting additions you might consider include Maple Syrup and even Chili Powder or Pepper Flakes. Don’t be afraid to experiment!

I’ll leave my Ham in the cure tightly covered in a cool place (like the beer fridge) for a week to ten days. It’ll get saltier and more flavourful as the time goes by.

There are two paths to Ham paradise: One leads directly to the roasting pan (where you want to cook it low and slow, at about 275 F to 300 F until it reaches an internal temperature of at least 160 F), while the other takes a detour through the smoker for about 4 hours. After that, it’ll want another 20 min. per pound in the same low oven to be ready for service.

Bacon can be slices directly from the piece and used in any and every way you’d use store-bought Bacon. Or, you can give it a couple hours of smoke first, to enhance its flavour and character.

Yes, you can freeze cured/smoked pork products, tightly wrapped for up to three months.

It’s as easy as that!

Now, go out and take the bold step! Buy that Pork Shoulder or Belly! Try making your own Ham and Bacon… You’ll love it!